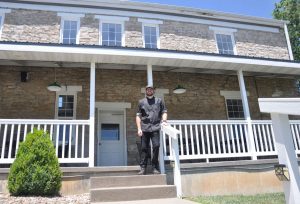 Palmyra has a new place for fine dining, thanks to the driver of an aspiring restaurateur.

The owners, Coltin and Deidra Cole, hope the newly renovated location becomes a casual fine dining destination spot for the area and beyond.

The couple comes from the St. Louis area, but the wife is originally from Hannibal, and that’s how they learned about the availability of the location.

“I just happened to run across the place online,” Cole said and was immediately struck by it’s potential for what he had in mind.

“It’s unique. It’s not like your typical shopping center restaurant or Main Street restaurant,” he said.

He also saw its location in Palmyra as an ideal place for a destination restaurant that will draw not only from Quincy, Ill. and Hannibal but even from Springfield, Ill. and St. Louis.

“It’s so unique and the atmosphere of the area is such, this will give people an option of not having to drive to the city for fine dining,” Cole said.

Fine dining it will be with a menu featuring sea food flown in and not frozen and authentic Italian pasta with everything made fresh from scratch.

“It’s not going to be a microwave noodle with canned pasta sauce,” Cole said.

Coltin  said his love for cooking goes back to his mother who would let him sit in on her summer cooking classes where he learned to bake a cake along with a group of housewives.

Then his father retired early, bought a concession trailer and he was hitting the summer fair and festival circuit.

After high school, Coltin went into culinary school only to drop out his last year in order to pursue a mixed martial arts career.

However, his sporting life helped him learn a new part of the food and drink industry by eventually becoming a bartender.

One of Coltin’s last stops was working in the kitchen at Frank Papa’s Ristorante in Brentwood, Mo, where he learned all about authentic Italian cuisine.

“He was a great mentor and teacher who made some of the best pastas I’ve every had,” Cole said.

This will be his first dive in to the restaurant business on his own, but he said his long background has prepared him for something that has become his great calling.

“I’m very passionate about it,” he said, noting he will keep an eye on all aspects of the restaurant from the kitchen to the cocktail bar and the dining area in order to make sure customers get the same quality Monday they received on Saturday.

“They come in happy and leave happy, that is my goal,” Cole said.

The desire also is treat everyone as family so they feel like the family.

Local customers will feel right at home, Cole said, due to the fact that about 80 percent of the 20 employees hired are from Palmyra.

The restaurant is open from 5 to 10 p.m. Monday through Saturday. Cole said reservations are preferred.

There is also additional dining space outside on the patio, which will also feature an outdoor cocktail lounge, with a wine selection.

“Even if this isn’t a place you came to for dinner, its a also place to; have a cocktail before you go to wherever you’re going,” Cole said.

The restaurant is available for special events, but not in the traditional sense.

Cole said it will not be available for parties during weekends, and there will be a 60-person minimum for the four-course dinners offered.

“It’s not going to be for everybody,” Cole said. “I know this isn’t going to b e a place people come to twice a week, but maybe once a month, once every month or only for special occasions. And that’s fine, because that niche hasn’t been filled between Quincy and Hannibal.”

Cole said live music will probably become a regular feature, once the restaurant is established and running smoothly.

The Coles purchased the location in January, and were hoping to be open by April, but the COVID-19 pandemic upset their timetable.

“It actually helped me,” Cole said, noting he didn’t hire staff only to have to lay them off.

“It also helped me fine-tune the ideas I had for renovating, especially for the kitchen and bar.