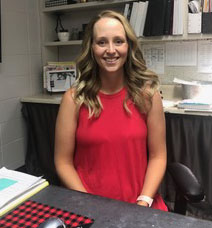 O’Bryan, who will be taking over for Jason Keilholz, who accepted the job as R-II superintendent, said she has always known an education career would be her goal.

“My mother,  Lana Spratt, retired this year from education after 38 years of public school education. My father, Eric Spratt, was also an educator and was the principal at Marion County R-II for 10 years until he retired,” OBryan explained. “Since I grew up in a family where education was life, I gained a true appreciation for the profession and decided to become a teacher after I began college.”

One could also say she has come full circle in her education path.

A  graduate of Marion County R-II High School in 2006, O’Bryan then  graduated from Hannibal-LaGrange University in 2010.

“My first year teaching I started my graduate degree solely to expand my knowledge of school management and increase my salary for retirement,” she said. “I knew once I got a teaching job at Marion County R-II I didn’t want to leave the district so I would wait for the opportunity to apply for an administration job, not knowing when that would be.”

Prior to coming back to Marion County, O’Bryan taught eighth grade science at Hannibal Middle School from 2010 to 2015. During that time, she earned  an education administration degree from William Woods University in 2012.

She also taught sixth grade math at Shelbina Middle School for one year before coming to Marion County R-II and teaching third through six grade communication arts and science for three years.

“After coming to Marion County R-II and teaching I began to believe that I would have the skill set to be in administration,” she said. “With encouragement from the previous administration, it became a goal that I sought to attain in the future.”

As the new principal, O’Bryan said she really only has one goal.

“My goal as principal is to continue the success that Marion County R-II has in academic achievement, preparing students for a fulfilling and successful life after high school, and maintaining a safe and caring environment for students to rely on each day,” she said.

Having worked with the current staff, O’Bryan said she believes that will only be an advantage for her in her new position.

“This will be my fifth year at Marion County R-II, and I have had the privilege to create working relationships with all the teachers and staff, which has created a chemistry that I will use to become a better servant to their needs,” she said. “I don’t see myself as a boss, I see myself in a role that will allow me to make teachers the best they can be by assisting them in expanding on their own strengths. Whatever teachers need, to do what’s best for kids, I try my best to do.”

While striving to do her best to assist the teachers in their jobs, there is at least one aspect the teaching field she will miss herself.

“I will miss the daily preparation and interaction with students and the direct effect teachers have on student’s growth,” she said.

“My role has changed, but I will still have the privilege of getting to know kids on a personal level and help them with making good choices,” added O’Bryan, who will continue as the special education director. “I want students to love school and be excited to come to school each day, and I have a direct impact on that, which I do not take lightly.”

O’Bryan said she also will not be taking lightly the impact the COVID-19 pandemic has made on education.

“The pandemic has opened the world’s eyes to how precious and valuable face to face contact between each other truly is,” she said. “In education there is more than just a teaching curriculum that goes on between students and teachers/staff. Relationships that teach life lessons happen daily between students and bus drivers, custodians, teachers, coaches, etc.

“I pray we learn from our past experiences to ready ourselves for the future, and will be better because of what we’ve been through in education,” O’Bryan added. “Whatever it takes to do what is best for kids, we will do, with the resources and information we have at the time.”

Getting to return to her hometown also is a personal advantage for O’Bryan’s family as well.

“I had the privilege of been raised in the Philadelphia, Mo. community and attended kindergarten through 12th grade at Marion County R-II. I knew I wanted my own children to be able to experience the benefits of being raised in a small farming community and going to a school where people truly care about your success,” she said. “When I was given the opportunity to come back to Philadelphia and teach I was humbled and jumped at the chance to work where I lived.

O’Bryan and her husband, Kirk, have four children, Keller, 8; Kimber, 6; Kohl, 4; and Kizer, 2. The three older ones attend Marion County R-II, and the family lives in the Philadelphia area.