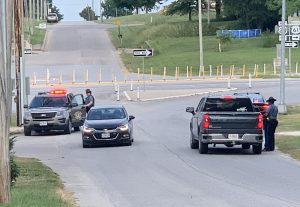 Members of the Missouri Highway Patrol check with motorists coming in and out of Palmyra at the U.S. 61, Ross Street intersection during a manhunt last Tuesday.

Stulgate is also wanted on a Cook County, Ill., warrant for home invasion.

Stulgate was taken into custody at 7:53 a.m. Wednesday on Doyle Manufacturing property, north of Palmyra, by members of the Marion County Sheriff’s Department and Missouri Highway Patrol.

According to Palmyra Police Chief Eddie Bogue, his department was dispatched at 3:30 p.m. Tuesday to assist the state patrol and sheriff’s office in helping stop the subject who had fled from a traffic stop on U.S. 36 near Monroe City.

However, Bogue said the fugitive, driving amaroon Enclave, turned off onto a county road south of the city limits, where he abandoned the vehicle.

Now on foot, the suspect then approached a Marion County Road and Bridge Superintendent Mike Schaefer at CR 258 south of Palmyra in a silver Ford pickup, pointed a gun at his head and forced the driver to get out.

Schaefer said he was actually talking on the phone to a sheriff’s office employee about another matter when the suspect approached him and stuck his gun at his head through the open driver’s side window and threatened to shoot if he didn’t get out of the truck.

Schaefer said he did as he was told, and the suspect drove off in the pickup truck with his phone still connected to the sheriff’s office as he left.

Schaefer said the encounter happened when he was driving along CR 258 and saw the suspect’s vehicle coming at him swerving all over the road before stopping.

“It was pretty nerve wracking to have a gun pointed at your head,” Schaefer said.

Stulgate then fled in the truck north on U.S. 61.

Unaware of the changing situation, Bogue said he did not see the truck go by, but in the meantime, was flagged down by a driver and passenger in another vehicle who reported their car was shot at near the off ramp from Bus. 61 south of Palmyra.

Bogue said the bullet went through the driver’s side windshield and into the dashboard.

The suspect was later seen at the Breaktime convenience store on East Main Cross, but had left on foot, headed toward the Hardee’s restaurant off of U.S. 61.

Authorities began a massive search in an area bordered on the west by N. Lane Street.

The search involved members of the police department, sheriff’s office and state patrol. Also utilized in the search were an airplane and a K9 unit from the Shelbina Police Department.

Bogue sent out a Code Red Alert calling for Palmyra citizens to lock down their businesses and homes while the search continued for the armed individual.

Bogue said the suspect was reported seen by an individual about three miles north of Palmyra at about 6 p.m., and was later seen by authorities again fleeing from a creek bed and was even spotted two more times from the air while still avoiding capture before darkness set in.

At approximately 7:50 a.m. Wednesday, the suspect was located behind Doyle Manufacturing on U.S. 61 north of Palmyra, where he was taken into custody by the sheriff’s office and state patrol. Stulgate was being housed without bond in the Marion County Jail in Palmyra.