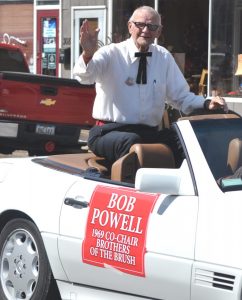 Bob Powell, the late business and civic leader, is remembered as a true gentlemen and a Palmyran through and through.

“He was always respected and will be missed by all residents of Palmyra,” said Mayor Loren Graham, in summing up the Palmyra native’s legacy.

Powell was the long-time owner and operator of NEMO Cleaners a dry-cleaning business that was a lynch-pin of Palmyra’s Main Street downtown.

But he was much more than that, known as a hard-worker at whatever he put his mind to.

“When I first moved to Palmyra in 1976, Bob Powell, “NEMO,” was a hard-working part of the vibrant downtown business community,” said Tom Lemons, a long-time Palmyra dentist, now retired.

“He was always a gentleman and part of the core-group of Kiwanis members.”

Jim Lovegreen, a fellow long-time Palmyra business man, considered him one of his best friends as they grew up, age six weeks apart, in the same neighborhood along East Ross Street, where they often played war games in a nearby pasture.

“He used to say, he was so poor he would get one shoe for Christmas and have to wait another year for the other,” Lovegreen said.

Lovegreen remembered him as a shy boy growing up, but that all changed when Powell joined the U.S. Army after high school and served his country during the Korean War.

“His early shyness became history after the military and after taking a Dale Carnegie class,” Lovegreen said.

Lovegreen recalled Powell also as a dedicated Kiwanis Club member serving as president as well as head of the high school Key Club.

But it was his passion for flipping hamburgers in the Kiwanis Club’s Fall festival concessions stand where Powell stood out.

“He took ownership of the festival grill,” said Lovegreen, who appreciated Powell’s gentlemanly behavior and steadfastness.

“I often said, he would be my No. 1 choice to be in the fox hole with me,” Lovegreen said.

Powell was also remembered for his hard work.

And the business was an area landmark until they finally had to shut it down a week before he died July 9.

“They took their pride in hand pressing each garment to make sure you looked your best,” said Powell’s daughter, Michelle Merkel. “He loved going to work each and every day.”

Powell was also involved in Jaycees as well as other organizations and was credited with helping lead the effort in developing the Jackson Park Golf Course, Teen Town, the Khoury Baseball program and Palmyra’s Sesquicentennial Celebration in 1969.

Powell was also known as a gifted musician as well as for his active membership in St. Joseph Catholic Church and Knights of Columbus.