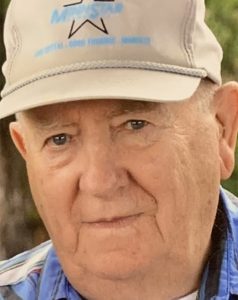 James (Jimmy) William Janes, 91, Hannibal, Mo., passed away on July 22, 2020 and will be buried alongside his wife, Marjory Lear Janes, at Grand View Burial Park in Hannibal.

A private family service will be held at a later date.

Mr. Janes was born at home in a four-room house in Lakenan, Mo., in Shelby County on Sept. 11, 1928. He was the third child of Theodore Thomas, Sr., and Goldie Yancey (Wood) Janes.

In 1937, as a fourth grader, he moved with his family to Hannibal. After high school, he enlisted in the United States Navy and was sent to San Diego for basic training. He served in the Panama Canal Zone for two years.

During this time, Jimmy found a way back to Missouri to marry Marjory Jean Lear on Oct. 26, 1947. He was later discharged from the Navy and returned to Hannibal.

In September 1950, at the beginning of the Korean War, he was recalled and sent to Charleston, S.C. and assigned to the USS Bryce Canyon AD 36, a destroyer tender. After service in Japanese and Korean waters aboard the Bryce Canyon, James was released from duty and returned to Hannibal.

During their time in Hannibal, James and Marjory became parents to their first two children, Janis Anne and James Edwin (Bud). Early in 1953, this small family moved to Oklahoma where they welcomed two more children, John David and Jerry Wayne. In 1958, the family moved to Olathe, Kan. where he was employed by the postal service. While in Olathe two more children were born, Gloria Jean (Jeana) and Judith Lynne.

In 1966 the family made it back to Hannibal where James worked for the post office. In 1973, James took an assignment as postmaster in Philadelphia, Mo., where he continued working until his retirement in 1986.

Following retirement, James and his wife Marjory were able to visit all 50 states and spend 21 winters in the Rio Grande Valley of south Texas.