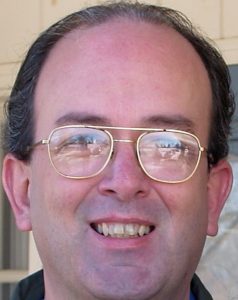 John was preceded in death by his parents.

John joined the United States Navy after school and served our country for 23 years. He served with various amphibious battle groups, sailing on the Bonhomme Richard and the USS Missouri. His commissions took him around the world. He retired as a senior chief, the highest rank possible as an enlisted man. He was a large part of the recommissioning and decommissioning of the USS Missouri battleship.

He later worked for Marion County 911 and Marion County Ambulance District. He was an emergency management director for Palmyra and also served on the Palmyra Fire Department for several years.

Away from work, John was an avid train enthusiast. He enjoyed collecting train memorabilia, watching trains and even photographing them. With an exceptional eye for photography, John had a gift for capturing special family memories and events over the years on film.

He was the longtime videographer for the Palmyra Panthers football team and was very much looking forward to filming in the press box of the new stadium this fall.

A history buff, John was interested in Palmyra area history and was a member of the Sons of Confederate Veterans. Mizzou sports, Dallas Cowboys football, St. Louis Cardinals baseball and NASCAR were a few of John’s favorites.

Most of all John cherished the moments he shared with his family and friends. As a founding member of “The Brain Trust,” John relished time spent with the group solving the world’s problems at the Rebel Pig.

However, John’s most treasured memories were attending Mizzou tailgates with Amy, parading Amanda in his Corvette for her numerous pageant titles, and getting to travel and share his passions with Shelley.

John was one-of-a-kind, and lived life to the fullest. With his gregarious personality and unflinching liveliness, John gifted everyone he met with a lasting impression.

A funeral service will be held at 11 a.m., Saturday, Aug. 29, at Lewis Brothers Funeral Chapel in Palmyra. Reverends  Mark Carpenter and Dewayne Larenson  will officiate. Burial with full military honors by American Legion Post #174 Boots-Dickson, will be at Greenwood Cemetery in Palmyra.

Friends and family are invited to John’s life celebration at a visitation that will be from 5 to 7 p.m., Friday, Aug. 28, at Lewis Brothers Funeral Chapel.

Memorials may be made to the Great River Honor Flight or to the Heritage Seekers for the restoration of the Marion County Jail.