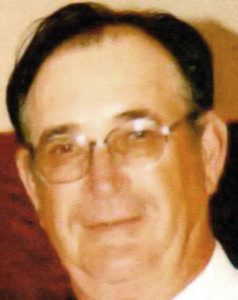 Russell was born on Sept. 4, 1935, in Ely, Mo., to Oscar and Marguerite Pollard Stone. He was married on July 10, 1954, to Doris Elaine Johnson at the Christian Church in Monroe City, Mo.  She survives.

Russell was a lifelong farmer in the area and worked at the Missouri State Highway Department from 1959 to 1994, retiring with over 35 years of service.

A talented musician, Russell played the guitar and many other instruments while also singing. Russell enjoyed performing with his band, “Russell Stone and The Moonlighters”. He also performed at the Possum Holler Opry.

Russell enjoyed trout fishing and traveling south, including time in both Texas and Arizona, in the winters with his wife, Doris.

Restoring old tractors was also a hobby Russell took pleasure in. He enjoyed returning the tractor to pristine condition and then sharing that bit of history by driving the tractor in area parades and at the Old Thresher’s Reunion.

Most of all Russell cherished his family and friends and especially enjoyed the moments he shared with his grandchildren.

Russell was currently a member of the Providence Baptist Church of rural Palmyra, Mo., and previously attended the Calvary Baptist Church in Hannibal in his younger years, where he was an R.A. leader.

Funeral services will be held at 11 a.m., Tuesday, Sept. 1, at the funeral home. Rev. Ronn Pashia and Rev. Lindell Shumake will officiate. Burial will be at Providence Baptist Church Cemetery in rural Palmyra.

Friends and family are invited to Russell’s life celebration at a visitation that will be from 10 to 11 a.m., Tuesday, Sept. 1, at the James O’Donnell Funeral Home in Hannibal.

Memorials may be made to the Providence Baptist Church Cemetery Association or to the Russell E. Stone Music Scholarship.