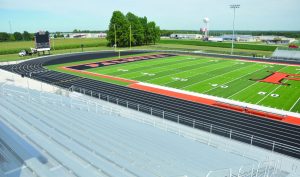 The new PHS sports complex will be ready for the inaugural home football game this Friday when the Panthers take on Macon at 7 p.m. The new facility has a video board, space for 1,400 fans, new concession stand/restrooms as well as a Panther Plaza entrance are from the south parking lot.

Barring any changes caused by the COVID-19 pandemic, the PHS football team will inaugurate the new state-of-the-art stadium Friday when playing host to Macon at 7 p.m.

Meanwhile, workers are rushing to put some of the finishing touches on phase II of the entire high school sports complex project which cost a total of $3.3 million.

“The electricians have a few lights to install inside the grandstand storage,” said Superintendent Kirt Malone of the work to be done this week prior to the football game.

A few other things still need to be done, including landscaping work at the Panther Plaza, entrance area. Otherwise it will all be ready to go including the new home grandstands with press box, the concession stand and the video scoreboard.

“I am proud of how it has turned out,” said Jared Pontius, high school principal. “From the track and field to the scoreboard, concession stand, and seating, it really is a wonderful complex.”

Despite some expected grumbling over replacing the long-time home of PHS high school football at the middle school, the facility is generating excitement in and out of the school.

“The high school students have been excited about it since construction started last year,” said Pontius, who said he’s heard conversations in the hallways about it being the best “stadium” of anyone we play.”

Pontius pointed out the complex is not just a new football field and all-weather track and field facility, but an outdoor classroom with all sorts of uses.

“I went out there last fall and four sports/activities were using the facility at the same time. That was really neat to see,” Pontius said.

Track and field athletes didn’t get to use the new facilities as hoped last spring due to the pandemic, but the football team is looking forward to baptizing the new football field graced with a giant orange Palmyra P at midfield and having served as the program’s practice field last season and into this one.

“I’m ready for it,” said Brody Lehenbauer, the senior quarter-back, after the team won it’s second road game of the young season Friday.

Now he and the rest of the team are anxious to play at their new home.

“I’m just excited about it and seeing the crowd in the new stadium,” Lehenbauer said.

“We’re super excited,” said Coach Kevin Miles. “It’s a beautiful place, and we just can’t wait to get their and going.”

Malone said his youngest son was on last year’s team as a senior and got to practice on the new turf which they called “the best practice field around.”

“I hope this year’s team thinks that they have the best game field around,” Malone said.

And it very well could be, if you include all of the amenities.

For starters, the home grandstands hold 1,400 people and will face the east which means they won’t be staring into a glaring setting sun as they have for generations.

There is also a handicap accessible ramp to make for easier access.

Not far to the left is a large new concession stand and rest-room facilities. And, at the north end of the field is a large video scoreboard that’s expected to enhance the “Friday Night Lights” experience.

The American-made product sold by Digital Scoreboards has a high pixilation rate to provide high-quality video to entertain fans during events.

“In preparation for this new season we have prepared some special videos we think will add to the entertainment value of our games,” Malone said.  “Our orange and black school colors really show up well on the turf and the black track encircling the field highlights the giant Palmyra P in the middle of it all.”

“I think for me the highlight of new facility is the field itself,” said Pontius. “I love the “P” at the 50 yard line.”

Even before the fans reach the complex, they will know they are entering Panther territory with arched entrance ways through ornamental fences from both parking lots and a special, still to be completed Panther Plaza on the southside.

“I think the archways and the ornamental fence create a strong visual for everyone who attends events at the complex,” said Malone of the structures, a product of Michelman’s Steel in Quincy.

The Panther Plaza will feature paving blocks currently being sold as a fund-raiser by the Athletic Booster Club.

“When the landscaping at Panther Plaza is finished, I think it will make a very pretty backdrop for pictures,” Malone said. “It will also be nice to see for everyone who attends basketball games.”

Increased convenience and safety are also major features of the complex.

“The convenience is nice to have,” said Pontius, who noted all of the transporting that took place from the high school to the middle school before every game.

“It will be nice to have everything here at the high school for football games,” Pontius said. “An increased amount of safety and accessibility is also something the new complex provides. Handicap accessible bathrooms and seating will be a benefit for many of our community members.”

Malone credited all the firms involved with the entire complex for keeping it all within budget constraints while realizing the original goals ancdconcept.

“I am proud of the entire final product, because it all fits together so well,” Malone said. “The school district partnered with high quality organizations throughout the entire process, dating back a few years when the design phase began.”

Klingner and Associates designed the track and field as well as all the projects completed this summer including the concession stand, the grandstand and storage area, Panther Plaza and the archways.

And, Whiston Construction of Canton was the general contractor this summer.

“The Whistons were great to work with and were committed to providing us with a high quality product,” Malone said.

Yet another benefit of the new facility will be its high visibility along a major highway.

“It is neat to drive past the school on U.S. 61 and see the new facility back there,” Malone said. “I have had a lot of people comment the same to me this summer.”

Pontius said he is looking forward to seeing the reaction of visitors to the complex for the first time, especially those who  are sad about retiring the old field.

“Even though it is a new facility the tradition of Palmyra athletics has been carried over here,” said Pontius, a former standout Panther football player who enjoyed playing on the old field.

“I think for those community members who have not seen the facility yet, they will be amazed at how it turned out.  We really are lucky to have as much support as we have had from our community to make just an incredible complex.”