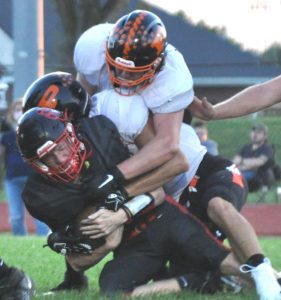 Panther defenders bring a Bobcat ball carrier to his knees pretty much like they did all night long, holding Bowling Green to 48 total rushing yards.

The PHS offense struggled while the defense ruled supreme for a 13-0 football win at Bowling Green.

After blowing out their first opponents the week before, the Panthers managed just two touchdowns against a tough Bobcat defense.

Meanwhile, the Bobcats had several opportunities to score themselves but found it impossible against the Panther defense which has yet to give up a point.

“Our defense is good, and did a lot of things well tonight,” said Coach Kevin Miles.

“They were the winners of the gamer tonight,” said senior quarterback, Brody Lehenbauer.

The offense foundered early and late against Bowling Green, but managed to score all they needed to in the second and third quarters.

After failing to earn a first down in their three first-quarter possessions, the Panthers finally found the scoring formula starting the second quarter, putting together an 11-play, 81 yard drive capped by Lehenbauer’s one-yard plunge.

However, the drive had to be resuscitated on fourth and two from the Panther 30 with a fake punt when Zane Meyers lofted a pass down the right sideline to senior tight end Abe Hoerr who made a leaping catch for a 33-yard first-down gain.

Nolyn Richards kicked the extra point attempt through the uprights to give Palmyra a 7-0 edge with 7:33 left in the half.

But, the Panthers failed to threaten with their last two possessions before regrouping at halftime.

After the defense forced Bowling Green to punt for the fourth time in the game to start the second half, Palmyra went to work again on a 12-play, 68-yard drive which ended on Lehenebauer’s 10-yard dash into the left side of the end zone for the team’s final score.

But, there was still plenty of time for Bowling Green to get back in the game, starting with their third possession of the half, when an interception stopped a Panther drive on their own 27 yard line.

And, the Bobcats looked like they would capitalize on the opportunity when a trick pass play went for 55 yards and gave them first and 10 at the Panther 14.

Still, Bowling Green only managed to reach the Palmyra 11 before ending on an incomplete pass on fourth and 14 to go.

Amazingly, Bowling Green got two better opportunities on their next two possessions but failed to find the end zone.

A Panther fumble gave the Bobcats the ball on the Palmyra 13, and thanks to a Palmyra penalty faced first and goal from the Panther 7 before the drive bogged down at the Palmyra two.

A failed Panther fake punt gave Bowling Green their next ideal opportunity from the Palmyra 35, and the Bobcats earned first and 10 from the 22-yard line, before the Panther defense pushed them back from there.

With just 4:13 left, Palmyra still failed to move the ball giving Bowling Green one more chance to break the shutout, but they did not reach Panther territory before time expired.

The Bobcats gained the rest of their 141 total yards through the air, but take away the 55-yard trick play, and they completed just 8 of 17 passes for 55 yards.

The Bobcats managed just six first downs over 11 possessions and two of them came as the result of Panther penalties and only one came in four chances within the Panther 20.

Palmyra’s offensive stats were nothing to brag about, but the 257 total yards were enough.

“The O-line came out of the half big, and Wade and Ross both did a really good job,” said Lehenbauer who completed three of 10 passes for 37 yards and an interception.

Coach Miles attributed a lot of the team’s offensive struggles to a stout Bowling Green defense as well as the continuing early learning process.

“We know we’re going to have some ups and downs, and tonight was one of those nights,” Miles said.

And, there may have been some letdown after last week’s blowout victory.

“I think we overlooked this team, and we need to make sure we go week to week,” Lehenbauer said. “(The Bobcats) definitely got a lot of motivation after we got on top.”

“We thought Coach (Joe) Chinn and his staff did a good job, and their players played hard,” said Miles who believed the Bobcats would be tougher than their first opponents.

“We knew this team was going to play with a lot more heart, and they were going to be more fundamental and a lot more physical.”