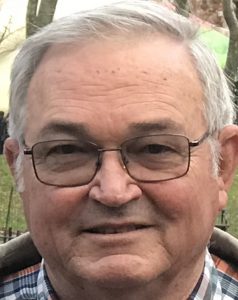 Rex was born to Reginald and Norma (Feigenspan) Pflantz on May 17, 1950. He married Jill (Lehenbauer) Pflantz on June 13, 1970. The couple recently celebrated 50 years of marriage.

Rex knew from an early age that he wanted to be a farmer, and he spent nearly three decades raising hogs and crops on his farm near Hannibal. He then enjoyed a second career as a health inspector, working at the Marion County and Adams County health departments for a combined total of 17 years before retiring in 2017.

Even as Rex worked full-time, he continued to experiment as a hobby farmer, raising emus and then goats before cultivating a mushroom-growing business that supplied mushrooms to several Quincy restaurants.

Rex was a dedicated community and church member who held a variety of offices at Zion Lutheran Church in Palmyra.

He served on many local boards, including the Luther Manor Nursing Home Board, the Greenwood Cemetery Board, the Soil and Water Conservation Board and the Junior Fair Board. In addition, he belonged to a number of local organizations, including Palmyra Young Farmers and 4-H.

After “retiring to be creative,” Rex developed a passion for buying unusual items at auction and repurposing them into new objects.  He saw potential in everything and everyone, even if others didn’t.

Where one person saw a cream separator, Rex saw the base for a high-top table. He turned an old jail cell into a secluded sitting area in his garden. He built a gazebo for his fire pit, his cast-iron stove, his smoker and his extensive collection of cast-iron skillets and antique kitchenware. He turned a grain bin into a shelter for a mud oven he fashioned by hand, using materials from the creek on his property. He made cutting boards and tabletops out of live-edge wood. He was the ultimate tinkerer, and if he couldn’t figure out how to fix something, well, it probably couldn’t be fixed.

But Rex’s greatest achievement was his family, including his daughter, Melissa (Sam) Hanlin, Olathe, Kan.; and son, Mike (Trisha) Pflantz, St. Louis, Mo.; as well as his four grandchildren, Rachel and Andy Hanlin and Maisy and Delia Pflantz. Rex never hesitated to say how proud he was of his kids and grandkids.

We were proud of him, too, for living his life with honesty and integrity and humor, with respect and love and loyalty and kindness. He was an excellent role model of a husband, a father, a grandfather, a neighbor, a relative and a friend. We will try to continue to make Rex proud, and we will carry him in our hearts every day.

Rex is also survived by his beloved sisters, Roxie (Jim) Bunk and Elaine (Richard) Thompson, both of Palmyra, and Vi (Steve) Weiker, Colfax, Wis., as well as his nieces and nephews.

The funeral service for Rex Pflantz will be held at Lewis Brothers Funeral Chapel on Thursday, Sept. 10, at 2 p.m.

All attendees must wear protective masks in honor of the family’s wishes.

Donations may be made to Zion Lutheran Church, Blessing Home Care or Community Loving Care Hospice.