After going 11 days without playing a game, the Lady Panther softball team made up it by playing four games this past week, going 2-2.

The Lady Panthers (4-4) broke a two game losing streak with a 5-2 win at Monroe City to cap off the week Saturday.

Palmyra received some help in scoring two runs in the top of the first inning as the first two batters, Abbey Redd and Alaina Loman, reached base on errors and were driven home on a double by Jenna McVeigh. 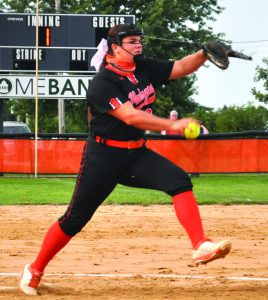 Lydia Althoff delivers a pitch during the first inning of her no hitter against Bowling Green Monday.

Monroe City came back to tie the game with single tallies in the first and third, before Palmyra put the game away with a run in the fifth and two in the sixth.

Redd drove in Sophie Haerr from second with a single in the fifth, and Jazlin Gottman and Lexie Peuster scored runs in the sixth.

Kennedy Wilson earned a complete game victory, giving up just one earned run on four hits and two walks while striking out six.

The victory evened the team’s Clarance Cannon Conference record at 1-1.

Palmyra was shut out, 6-0, at home by Bowling Green, Thursday.

Bowling Green scored one run in the second, two in the third and two in the fourth before scoring an insurance run in the seventh. Only one of the runs was earned, as Palmyra committed four fielding errors.

The Lady Panthers reached second base just twice in the game and never threatened, with Bowling Green playing mistake free in the field. 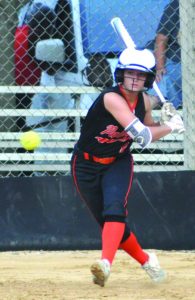 Palmyra’s Abby Redd prepares to swing at a pitch against Bowling Green.

Wilson started for Palmyra and went three and a third innings, giving up just four hits and five unearned runs while striking out two.

Lydia Althoff finished up, giving up three hits and one earned run, while striking out three and walking five over three and a third innings.

Palmyra also lost at home the day before, falling to Clark County, 10-3, in the conference opener.

The Lady Panthers had problems in the infield Tuesday, committing five errors that helped lead to five unearned runs.

The Lady Indians scored three runs before Palmyra got on the scoreboard with a run in the bottom of the fourth. But then Clark County all but put the game away with four runs in the fifth with just two singles to go along with two Lady Panther errors, a walk and a hit batsman. 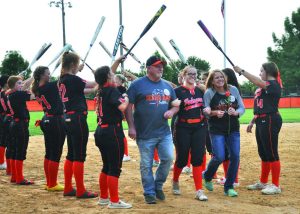 The Lady Panther seniors and their parents were honored prior to last Monday’s home game against Bowling Green. Above, Caroline Kizer and her parents go through the arch of bats held up by her teammates.

Peuster hit a double and scored, while Redd, Loman and Wilson had the team’s other three hits.

Gottman started and gave up three runs, one earned, on four hits and two walks while striking out four.

Althoff finished and gave up seven runs, four earned, on five hits and two walks while striking out four.

Palmyra opened the week with a 15-0 home win over Moberly behind Althoff’s four -inning no-hit gem.

The senior struck out four while walking none.

The other seniors include Sophie Hoerr, Drew Billups, Lydia Althoff and Sophie Ragar.

Loman went 3-for-4 with three driven in, including the walk-off run in the fourth, and Peuster was 2-for-3 with a double and two RBI. Redd contributed a triple.