The PHS football team defended their No. 1 state ranking with a 30-20, fourth-quarter comeback win at home over Monroe City Friday. 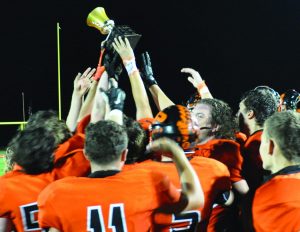 The Panthers hoist the Mayor’s Cup for the first time since 2015 after beating Monroe City, 30-20, Friday.

After falling behind in the first half, and going into halftime down 14-6, the Panthers appeared primed to take control early in the second half when they took the opening kick off and drove for a game-tying touchdown and then successfully recovered an on-side kickoff at their own 45.

But, they were unable to capitalize on that possession as Monroe City’s defense rose to the occasion and stopped the drive at their own one-yard line.

The defensive stand then sparked a 16-play, 99-yard touchdown drive which ate up over seven and a half minutes that gave Monroe City a 20-14 lead early in the fourth quarter.

Palmyra then suffered a blow on the ensuing kick off when sophomore speedster Hayes Miller returned into the red zone only to have it wiped out by offsetting penalties.

Palmyra still took control behind senior running back Ross Arch, whose first two carries gave the Panthers first down from their own 38. But on the next play, Arch broke through the Monroe line and raced 63 yards for the touchdown.

Miller then scored the two-point conversion to give Palmyra their first lead of the game, 22-20, with 9:20 left.

Palmyra’s defense then stepped up to notch two big tackles for losses and putting Monroe back on their own 31, facing fourth down a 29 to go.

The Panthers then received a nice piece of luck when the Monroe punt hike shot through the hands of the kicker who recovered it on the Monroe four-yard line.

Palmyra then took full advantage with quarterback Brody Lehenbauer diving in for the final score.

With 7:08 left, there was plenty of time for Monroe to come back, but their final two possessions failed, the first on an incomplete pass on fourth and 21 from their own 45 and then an interception by Palmyra’s Zane Meyers from the Palmyra 41 with 1:17 left.

“That was a stress relief right there,” said Meyers, who collected his team-leading third pick of the season.

Palmyra ran out the clock and began the celebration.

“It’s a feeling I’ve never had ,having not won this cup since I’ve been in high school,” said a jubilant senior, Peyton Timbrook, who lead the team with seven and a half tackles, including two and half for losses.

Monroe City came into the game raring for an upset, scoring the game’s first touchdown on their second drive and then  taking a 14-6 lead on their fifth possession late in the half.

But, much of their early offense came from the passing game which accounted for 151 of their 253 total yards, much of it coming in the first half on four completions from quarterback Kyle Hays to senior wide receiver Logan Buhlig for 106 yards.

The victory solidified Palmyra’s lead in the Class 2 District 6 standings with the other five teams now having two losses.

At 2-0, Palmyra is right behind 3-0 Centralia in the Clarence Cannon Conference standings.