The PHS varsity football got its offense rolling again for a 47-6 win at home over Highland Friday.

A week after slipping by Clark County 15-14, the Panthers (7-0) got four touchdowns from Hayes Miller while quarterback Brody Lehenbauer threw five scoring passes and ran for another to go to 4-0 in Clarence Cannon Conference play. 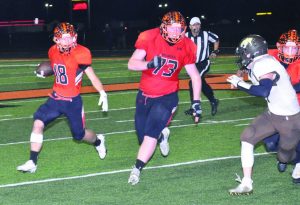 Palmyra’s Hayes Miller (18) above, follows the lead blockng of Weston King (73) for a big gain against Highland Friday.

Highland, which came into the game at 3-1 but had not played the last two weeks due to COVID-19, did not score until the very last play of the game.

“I’m sure (Highland Coach Dave Degarmo) was disappointed with the outcome, but with all they had to deal with, it was a  tough week for them,” said Panther Coach Kevin Miles. “ But, I’m sure they are also just excited to be playing again.”

After stopping the Cougars initial drive of the game, the Panthers went right to work, scoring on their first four possessions, all in four plays or fewer.

Miller sparked the first drive  with a 50-yard run leading to a 15-yard touchdown run by Lehenbauer.

Palmyra got the ball back quickly at the Highland 27 and running back Ross Arch blasted his way up the middle to the 10 on the first play, before Miller ran it on in for a 14-10 lead the Panthers took into the second quarter.

The two hooked up again on the next drive for a 50-yard touchdown pass to put Palmyra up 28-0 with 8:44 left in the half.

Lehenbauer was picked off on the next drive–a rare Palmyra miscue in the game–and the Panthers had to punt on their next possession. 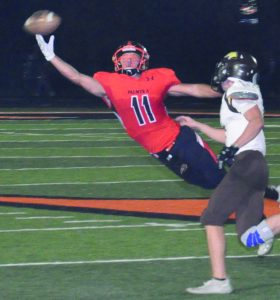 Zane Meyers reaches for but doesn’t quite grab a pass.

But they got the ball back with 1:14 left in the half and needed just 31 seconds to score when Lehenbauer found Landyn Smith for a 28-yard touchdown pass.

Nolyn Richards, who was six of seven on extra-point attempts in the game, missed on his fifth try. So, the Panthers went into halftime with a 34-0 lead.

Much of the second half was played with a continuous clock, but Palmyra managed to score two more times barely halfway through the third quarter.

The Panthers took the opening kickoff of the half and scored seven plays later on a quick four-yard touchdown pass from Lehenbauer to Abe Haerr.

Palmyra then successfully converted an onside kick to set up their final score.

Miller broke a 38-yard run, which when horse-collar penalty yardage was added, put the Panthers on the Cougar 16.

Then, five plays later, Miller ran it in from the two.

Highland’s running attack was held to 102 yards on 39 carries and needed a 17-yard touchdown pass from quarterback Drew Mallett to Cameron Bringer on the final play to get on the scoreboard.

Palmyra piled up 362 yards of offense, 157 of it coming on the ground.

Meanwhile, Lehenbauer burned the Cougar offense by completing seven of 11 passes for 157 yards and five touchdowns with just the lone interception.

Miller, who saw a bigger offensive role due to some injuries, accounted for the most yardage rushing eight times for 111 yards and catching three passes for 63 yards. In addition, Miller had a punt return for 16 yards.

“I thought he did a lot of good things tonight, and I thought Brody did well in getting him in the right spots,” Miles said.

Some of Miller’s big running gains came on jet sweeps with offensive lineman, Weston King leading the way around the corner.

“It’s fun to get out there with Hayes,” King said. “That’s probably one of my favorite plays to block on.”

“I just do what I can, and my teammates are amazing. That’s the only reason I’m doing so well,” Miller said of his breakaway performance.

The Panthers were playing without three starters, Peyton Timbrook, Wade Begley and Luke Triplett, who sat out due to injuries. However, Miles said after the game both are expected to return to action soon.

“It was great to see some of the kids fill in the voids we had to fill,” Miles said.