The Lady Panthers’ No. 1 doubles pair of Katy Rindom and Maura Gottman, defeated Marshall’s Karseyn King and Brock  Borchers, 6-4, 6-4 during Class 1 individual sectionals Saturday to earn a trip to the state tournament in Springfield this weekend. 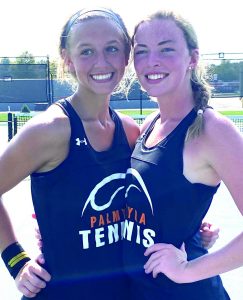 The competition begins Thursday at the Cooper Tennis Complex in Springfield and continues through Thursday.

Rindom and Gottman advanced to sectional by winning distict competition last Monday. The top-seeded pair won all three matchs beating a Mexico pair, 6-2, 6-0; a Father Tolton pair, 6-1, 6-3 and the No. 2 seed fron Mexico, 6-2, 6-1.

They ended up finishing third, when their opponents from Father Tolton forfeited.

Bianca Perkins lost her singles match to a Mexico opponent, 4-6, 2-6.