The victory advanced the Lady Panthers (10-2-1) to sectional competition in St. Louis, Monday. 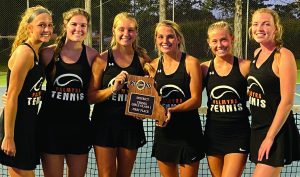 All three doubles pairs were victorious including No 1, Katy Rindom and Maura Gottman, 9-8, 7-2 tiebreaker; No. 2 Jaynee Durst and Rylee Ingram, 8-4; and No. 3 Reese Gottman and Bella Perkins, 8-5.

By clinching the team victory with five victories, the team’s No. 1 through No. singles players, Rindom, Maura Gottman and Durst, did not have to finish their matches.

Top-seeded Palmyra, which earned a first-round bye, advanced to the title match with an exciting  5-4 win over Father Tolton in the semifinals Wednesday.

“The match came down to the last two singles matches, Ingram and Perkins,” said Coach Jessica Gottman. “We needed them both to win. Rylee won in two sets, but Bianca lost the first set but won the second and third to clinch the win.”