The PHS softball team’s hopes of a another district title pretty much blew away in the wind Saturday in Monroe City.

Top-seeded Monroe City hit three home runs that were enhanced by a strong wind to right field, on their way to an 11-3 district championship win over the third-seeded Lady Panthers. 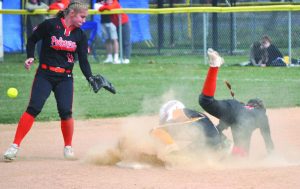 Palmyra shortstop, Alaina Loman is up-ended during a play at second base as second baseman, Jansen Juette looks on during Saturday’s district championship game.

Monroe City moved on top early with a two-run bottom of the first and went up 3-0 on a high-flying home run down the right field line by Carly Youngblood.

The junior leadoff hitter hit a two-run homer to center field in the fourth, and Bailee Hays added a solo shot to center to give Monroe City a 6-1 lead going into the sixth.

“It was cold on Thursday and it was windy today, and we didn’t adapt to the wind very well,” VanNostrand said. 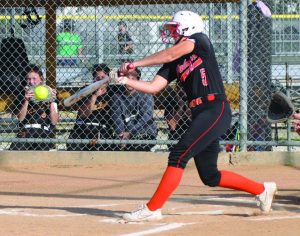 Palmyra rallied for another run in the sixth on a single by Jansen Juette and a double by Hailey Kroeger, but Monroe City came right back with five runs in the bottom of the inning to put the game away.

The Lady Panthers did not help themselves, committing seven fielding errors, while Monroe City made just one.

“You’re not going to win a ball game having seven errors,” VanNostrand said.

After receiving a first-round bye, Monroe City advanced to the title game with a 9-0 win over fourth-seeded Highland Thursday.

Despite the tough season-ending loss, VanNostrand was pleased with how her team battled through the season.

“This season was a roller coaster for sure,” she said. “I threw so many people out there, and they did their best, and I’m proud of them.”

She also believes the stinging loss will provide motivation for the future.

“I’m hoping the feeling they have now will build as a feeling next season, because we don’t want to be back in this spot.”

The Lady Panthers advanced to the title game with a convincing 13-0 upset win over second-seeded Clark County Thursday.

Palmyra scored two in the first, two in the second and four in the fifth before slamming the door with a five-run seventh. 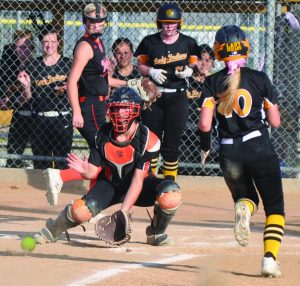 At right, Palmyra catcher Hailey Kroeger prepares to field a throw for a play at the plate during Wednesday’s quarterfinal against Van-Far. The Van-Far runner would be tagged out on the play.

The 15-hit offensive onslaught was in support of pitcher Jazlin Gottman who tossed a complete game, four-hit shutout, striking out 14 while walking just one.

Gottman, helped herself with three hits and four RBI while batting in the three-spot. Kennedy Wilson and Candra King also had three-hit games, while Abbey Redd and Jansen Juette contributed two hits each.

The Lady Indians mustered just two batted balls into the outfield against Gottman.

Palmyra opened the tournament with a 16-3, five-inning pasting of sixth-seeded Van-Far in the quarterfinals, Wednesday.

The Lady Panthers produced a 15-hit attack that included five for extra bases.

Doublers by Gottman and Hailey Kroeger sparked a four-run bottom of the first after  the Palmyra fell behind by two in the top of the inning.

Second-inning singles by Alaina Loman, Sophie Hoerr, Juette, Gottman and Kroeger were followed by a Lexi Peuster’s triple to cap off the seven-run rally.

Wilson went all five innings on the mound for the win, giving up just one earned run on seven hits, while striking out seven and walking none.

Clark County advanced to the semifinals with a 13-0 win over seventh-seeded South Shelby in the quarterfinals Wednesday.

Palmyra entered the tournament on the heels of a tough 10-7 loss at Hannibal Monday.

Palmyra tied the game at seven with a run in the top of the sixth, before Hannibal scored three in the bottom of the inning and held the Lady Panthers scoreless in the seventh.

Palmyra out-hit the Lady Pirates, 8-6, with Gottman and Juette hitting triples and Kroeger a double.

Gottman took the loss on the mound.

The Lady Panthers finished Clarence Conference play in third place with a 4-3 record behind Macon, 7-0, and Monroe City, 4-2.

Not all the scheduled conference games were played due to COVID-19 cancelations.