The Palmyra Panthers found out there is something good to have besides a talented team in forging an undefeated regular season: having the wind at their backs when they need it most.

Down 14-13 to Centralia with less than four minutes left in regulation and needing a boost from their passing game on a cold, blustery night in Palmyra, quarterback Brody Lehenbauer was glad to have the wind in his favor as he zipped a pass deep down the middle from mid-field.

The ball reached wide open senior tight end Abe Haerr who caught it in stride and took it in for what would be the game-winning touchdown to cap an undefeated 9-0 regular season.

Going up 19-14 with 3:36 left in the game gave Centralia time for two more shots at winning, but they had the wind in their face and the stingy Palmyra defense made sure the score would hold up.

As the top-seeded team in Class 2,  District 6, the Panthers earned home-field advantage and a bye this week and will await the winner of this Friday’s quarterfinal between fourth-seeded Clark County (3-4) and fifth-seeded Highland (3-4) for their opponent in the semifinals Nov. 6.

The week off is a good thing as the Panthers have some healing up to do, especially in the offensive backfield where running backs Wes Begley and Hayes Miller are nursing leg injuries.

“We’ll continue to prepare and try to get these guys healthy and get them back for week 11,” said Coach Kevin Miles, after the expected physical game against an undefeated Centralia team.

“We’re excited to finish with a 9-0 season,” Miles said. “We played a quality team tonight, and we’ll take the victory.”

Palmyra looked primed and ready as they opened the game with an unstoppable running game that produced touchdowns on the team’s first two possessions.

The Panthers took the opening kickoff at their own 20, and  ran behind Ross Arch, who carried the ball six times for 29 yards as Palmyra moved into Centralia territory

A holding penalty pushed them back to the 50, but it was only a brief delay as Hayes Miller took the handoff on the next play, ran around the right end and down the sideline untouched for the game’s first score. Nolyn Richards’ extra point kick gave Palmyra a 7-0 lead before Centralia had touched the ball.

Centralia started their first possession in Palmyra territory thanks to an unsuccessful onside kick and reached the Palmyra 32 before misfiring with an incomplete pass into the end zone on fourth down.

Palmyra went back to work on the ground against the north wind behind Arch and Miller, with Miller breaking a 37-yard run to the Centralia 11 which helped set up a seven-yard touchdown run by Lehenbauer.

The senior play-caller faked a handoff to Arch, who was tackled in the backfield, while Lehenbauer sneaked around the right end for the score that put Palmyra up 13-0 with just eight minutes into the game.

But, Centralia answered on the next possession when senior running back Luke Hunter broke free for a 54-yard touchdown run, which coupled with a successful two-point play narrowed Palmyra’s lead to five.

It looked like that score might stand as defense ruled supreme the rest of the half and through the third quarter.

However, Palmyra stopped one Centralia drive early in the second quarter when cornerback Landyn Smith stepped in front of Beau Gordon’s pass for an interception and a touchback in the end zone. 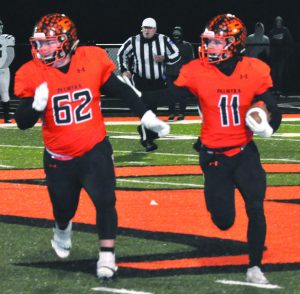 Centralia finally found the right combination when they started a drive late in the third quarter, going 65 yards on 12 plays before scoring on seven-yard run by Hunter to go up 14-13 with 8:31 left.

Palmyra’s running game had lost it’s advantage as Centralia made some adjustments on defense and Miller left with a leg injury near the end of the first half.

But Lehenbauer had made sure at the half they would have the wind behind their passing game in the fourth quarter, just as he did in the game the week before.

“Coach asked me, and I said I wanted the wind and it helped us come back in the fourth quarter against Summit Christian,” Brody said of the team’s late comeback win.

Palmyra first fourth quarter drive fizzled at the Centralia 31, but the defense forced a three-and-out punt and the Panthers got the ball on their own 39 with 4:18 left.

Lehenbauer’s first three passes fell incomplete, but on fourth and 10, he hit Arch for a 13-yard screen pass to earn first down at the Centralia 48. 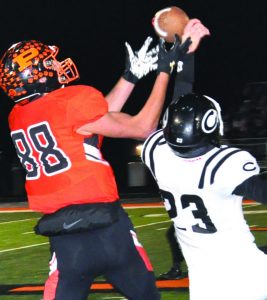 Palmyra’s Abe Haerr beats a Centalia defender for the ball….

The next play was set up for Haerr, who raced down the middle of the field where he was wide open for the winning pass.

“Brody and Coach Miles did great in recognizing the open hole,” Haerr said. “So, they gave me a post (route) and I took off down the middle into an open hole, and Brody put it right where I needed it to be.”

The final score was actually closer than what the game was really like as Palmyra dominated on both sides of the ball.

Ross (109 yards) and Miller (100 yards) led a rushing attack that piled up 229 yards with a 4.8 yards-per-carry average, while Lehenbauer completed eight passes for 190 yards including four to Zane Meyers for 103 yards.

Meanwhile, take away Hunter’s 54 yard touchdown run, and Centralia struggled for a paltry 25 rushing yards on the team’s other 31 carries.

The passing game was better but not by much as Gordon completed 11 passes for 115 yards and no touchdowns while getting picked off twice. 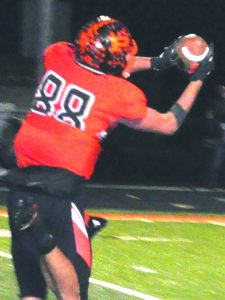 …and catches the game-winner late in the fourth quarter.

Smith had both interceptions to go along with six tackles tying for the team-high with lineman, Braden Madden, who had three and a half tackles for losses including one of the team’s two sacks.

Lineman Josh Lickfeld had five tackles including the other sack.

Palmyra’s win in theregular season finale gave the team a final Clarence Cannon Conference record of 5-0 but not a conference title. League coaches decided before the season not to award a championship due to the possibility games could be canceled due to COVID-19.

The Panthers did not get to play Macon or South Shelby which bowed out of games due to the virus.