Zion Lutheran Church is in the middle of a major project to renovate the sanctuary and other facilities.

But, while preparing to begin the endeavor, it was discovered an additional, unexpected project was needed to preserve the historic church building.

Engineers found serious problems with the church’s outer, west brick wall, serious enough that it will have to be taken out and rebuilt if the building is to remain viable.

“It’s been a concern for some time,” said Chuck Powell, a member of the church’s renovation committee, who indicated there have been some water issues over time. 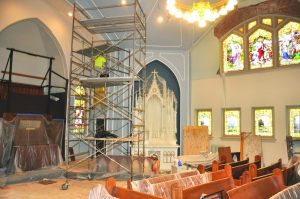 Work is under way to renovate the Zion Lutheran Church sanctuary.

While the foundation has been addressed over the years and remains solid, the brick wall is having issues with cracks forming due to settling and water damage over time.

The need for redoing the wall came to light as the church embarked on a $130,000 renovation of the inside of the building.

Having raised the money for and starting the renovation was part of the discussion as the church leaders and the congregation considered the possibility of building a new church instead and determined it was not a viable alternative.

For one thing, the price tag of $3.1 million–a far cry from the original church’s cost of  $22,000–would have been a challenge to  pay for at best and difficult to achieve on the same property footprint where the congregation has held services since 1947.

Besides, church members want to try to preserve the current structure built in 1914.

“The congregation is solidly behind it,” said Paul Frankenbach, a renovation committee member.

It will take some time before the west wall project can be completed. 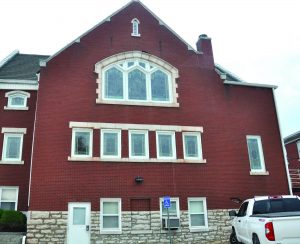 A new project is in the works to replace the building’s west wall will have to wait until spring.

The company contracted to do the job cannot get to it until spring. But, once work does begin, it is expected to be completed within 60 days.

In the meantime, the church will be busy raising money for the project.

Frankenbach noted there are not only the current members who want to see the church preserved, but also former members far and wide who still maintain a connection with the  church, along with community members who will want to pitch in.

“Palmyra is a very generous community. Whenever there is a need, the community rallies around it,” Frankenbach said.

Meanwhile, renovation of the inside of the church is moving along, especially inside the sanctuary.

The renovation is the church’s first since the 1990s in anticipation of the church’s sesquicentennial in 1997.

The current renovation will help the church celebrate its 175th anniversary observance in 2022.

While renovation work is ongoing, the church is holding services in the basement of the education building across the street.