Forrest was born Oct. 3, 1926, on the LaGrange, Mo. family farm to Luke and Lorene (Bilderback) Logan. He was married to Georgia E. Fletcher, June 11, 1955, at Bethel Lutheran Church in Bartonville, Ill. Forrest and Georgia celebrated their 65th wedding anniversary June 11, 2020. 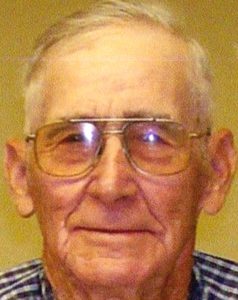 Forrest loved to give tractor rides to all of his grandchildren.

Forrest was preceded in death by his parents; one brother, Louis Logan; one sister, Eileen Bennett; and two great-granddaughters, Reagan and Abigail Ward.

Forrest was a United States Army veteran and served his country proudly during the Korean War.

Professionally he worked for the United States Postal Service and delivered mail in the Taylor area for 38 years, retiring at the age of 85. He farmed his entire life, beginning with his father at an early age. In his later years Forrest worked as the farm “supervisor”.

He was also a lifetime St. Louis Cardinal fan and especially was a big fan of Bob Gibson, the Cardinal Hall of Fame pitcher.

Forrest as a young man played for the Taylor Blue Jays on a ball field on the family farm. Forrest and a teammate, Otis Griesbaum, once had an opportunity to be scouted by the Cardinals organization.

Friends and Family are invited to Forrest’s life celebration from 12:30 to 1 p.m., Monday Dec. 21, at Mt. Olivet United Methodist Church in Taylor, Mo.

A memorial service will be held after the life celebration at 1 p.m., Dec. 21, at Mt. Olivet United Methodist Church.