The PHS Panthers outgunned Hallsville, but found it tough to put the Indians away in a 44-30 victory in the state quarterfinals in Palmyra Saturday afternoon.

The Panthers kept their foot on the accelerator on offense and clamped down on Hallsville’s running game on defense, but it still took both units to finally put the game out of reach in the third quarter. 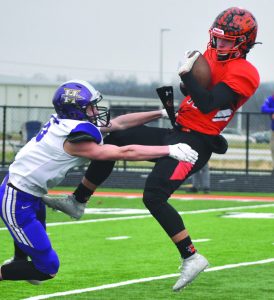 Zane Meyers leaps high for a catch before coming down and going into the end zone for Palmyra‘s second touchdown of the game.

“They fought until the final whistle,” said Weston King, a senior lineman dripping with sweat after the game which saw him collect eight tackles and three sacks.

“They were a very physical team, and hats off to them for not stopping until the final whistle.”

“We made sure the offense kept putting up points,” said Brody Lehenbauer, the senior quartereback who led an offense that piled up 438 yards of offense.

“I looked at film and in one of their games, they scored 79 points, so they were never out of any game,” Brody said.

Palmyra’s defense all but shut down the Indians running game, holding them to 108 yards on 33 carries. 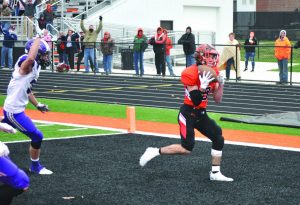 Collin Arch pulls in a touchdown pass from Brody Lehenbauer as the halftime horn sounds, giving Palmyra a 36-22 lead.

They even knocked out Hallsville’s starting running back, who suffered a broken leg on the game’s second play from scrimmage.

Never mind, the Indians managed to regroup and state in the game through the air with 302 passing yards, a season high against Palmyra, that kept them in the game until late.

“They did a great job,” said Coach Kevin Miles, of the Indians passing game, led by junior quarterback Tyger Cobb, who completed 22 of 31 passes and three touchdowns.

“When they had time to throw the ball, they did a great job, and they made some great plays and catches.” 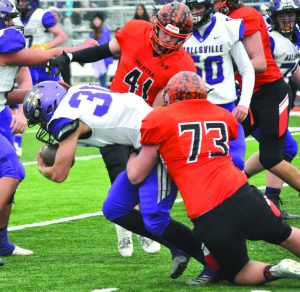 Palmyra enjoyed a 36-22 halftime lead thanks to a touchdown pass from Lehenbauer to Colin Arch with four seconds left in the half.

And, the Panthers went up 44-22 after scoring on the opening drive of the second half, but it really took a goal-line stand and a long time-consuming offensive drive that followed before Palmyra iced the victory.

Senior running back Ross Arch scored his second rushing touchdown of the game from one yard out with 8:25 left in the third quarter for Palmyra’s final score.

But Hallsville did not quit and had first and goal from the Palmyra 10 before Palmyra’s Landyn Smith broke up a potential touchdown pass from the three on fourth down. 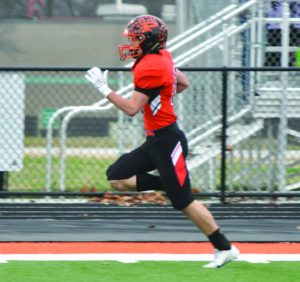 Palmyra’s Hayes Miller runs all alone 54 yards down the sideline for a touchdown.

Palmyra responded with an 18 play drive the other way, which did not result in a score but chewed up almost eight minutes off the clock

and forcing Hallsville to score three touchdowns in the 6:52 that remained.

Hallsville did respond with a scoring drive, but it was too little too late, coming with just 2:09 left.

Still, Palmyra was fortunate to get off to a great start, thanks in part to the efforts of Lehenbauer and Zane Meyers, a senior wide receiver.

Lehenbauer and Meyers connected on the team’s fifth play from scrimmage for a 59-yard touchdown catch and run.

Then on the team’s next possession, Meyers leaped high for a catch and ran the rest of the way for a 21-yard touchdown pass that put Palmyra up 12-0 just seven minutes into the game.

“Zane is probably the most underrated receivers in the area,” Lehenbaur said. 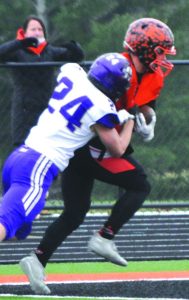 Zane Meyers drags a Hallsville into the end zone as he scores Palmyra’s first touchdown of the game.

But, with their ground-game grounded, Hallsville went to the air on their very next play, and Cobb hit AJ Austene, a senior wide receiver, who caught the ball along the right sideline at about the 50 and was gone for a touchdown to trim Palmyra’s lead in half.

Hallsville was even back in business on offense after a successful onside kick and reached the Palmyra 41 before the Panther’s Quade Plunkett caught the team’s first of two interceptions to end the threat.

Palmyra’s Abe Haerr got the team’s other pick to end Hallsville’s next possession and returned it to the Indian eight yard-line from where Ross Arch blasted into the endzone on the next play to put Palmyra up 20-6 near the end of the first quarter. 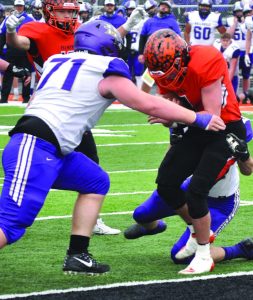 Ross Arch fights his way in for a touchdown.

Hallsville answered with a touchdown to trim the lead to 20-14, only to have Palmyra’s speedy sophomore wide receiver, Hayes Miller, take a hand

off at the Palmyra 46, turn the right corner and race, untouched, down the sideline for the team’s fourth touchdown and a 28-14 lead.

The lead still wasn’t safe, though as Hallsville scored on a 23-yard touchdown pass with just 34 seconds left in the half to trail by just six points.

But, Lehenbauer and the offense weaved some magic for the game’s most impressive drive after Smith returned the kickoff to the Palmyra 34.

A run by Miller with a personal foul penalty tacked on gave Palmyra the ball at the Hallsville 41 with 19 seconds left. 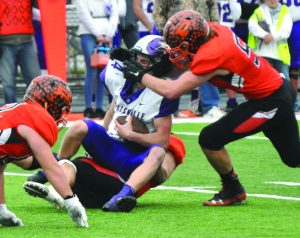 Meyers carried the ball to the 37 and Lehenbauer kept the ball and reached the 26 where Palmyra called time-out with four seconds left.

It was a pass play all the way, and Lehenbauer found Collin Arch wide open in the left side of the end zone as the horn sounded, leading to the 36-22 halftime lead.

Palmyra was led by its ground game which gobbled up 275 yards on 43 carries, with Miller and Ross Arch accounting for most of it, Miller gaining 91 yards and Arch, 86.

But Lehenbauer utilized the rest of the offense, completing eight passes, three for touchdowns for 163 yards. Meyers  caught six passes for 121 yards. 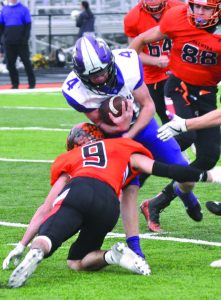 Collin Arch (9) puts a hit on the Hallsville quarterback.

On the last one, Lehenbauer did a pretty good impression of the Chiefs’ Patrick Mahomes, scrambling to his right, avoiding  the sideline and a tackle before tossing the ball underhanded to Haerr in the end zone.

“Brody is a dude,” Miles said. “He does a lot of good things out there. He put us in a lot of good spots. I can’t say enough about the things he does.”