With cremation becoming an increasingly used option, the cemetery has added a special columbarium area in the cemetery with storage for 48 urns, and is expandable to a total of 144 arranged in a circle with landscaping in the center. 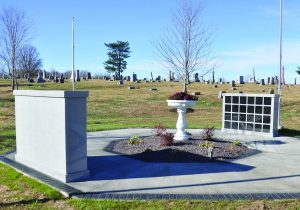 Palmyra’s Greenwood Cemetery now has a columbarium with room for future expansion. The restored planter in the center dates back to before the 1930s.

“This is the future,” said Gerre Feigenspan, the cemetery caretaker, who with his crew and a concrete contractor,  have it ready to meet the demand.

“Cremations are getting to be a lot more of our business than burials. It’s cheaper,” Feigenspan said.

Reserving a crypt in the columbarium, and having the urn placed in it, sealed and lettered costs $1,500.

“And, you don’t have to buy a stone either. It’s all right there,” said Feigenspan, who said the cemetery is now taking pre-need reservations.

“We’ll do it just like a pre-need burial space on the grounds,” he said.

A few crypts have been spoken for, and Feigenspan said he expects to receive an increasing number in the future.

“Nationwide, it’s about 35 percent of the business, and we’re seeing a great deal,” Feigenspan said. “We have months where we have five or six cremations.”

Cemetery space is becoming an issue for many cemeteries including Greenwood.

“Someday we’re going to run out of ground,” Feigenspan said. “We’re not going to see it, but it will happen.”

As a result of needing to look to the future, Feigenspan said, the cemetery board told him about a year and a half ago to look into mausoleums and columbariums, but found that mausoleums were impractical.

“The one the cemetery was built in 1952, and there are still spaces available,” he said.

Work on the new columbarium began in earnest about a year ago with much of the work done by staff.

“Concrete work was contacted with Dan Boulware, and the two columbariums were ordered.

“It took about six months to get them. Then we set them and did all the landscaping ourselves,” Feigenspan said.

The columbarium area is set  just to the west of the main entrance to the cemetery and has room for more as needed.