The Panthers didn’t have enough comeback magic and saw their dream season end with a 31-14 loss in the Class 2 semifinals at St. Pius X (Kansas City) Saturday afternoon.

Palmyra overcame a flat start to tie the game in spectacular fashion, 14-14, going into halftime. 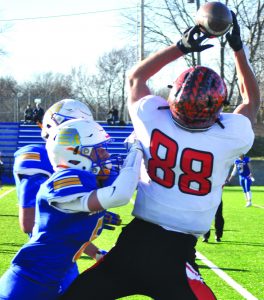 Abe Haerr’s pulls in the first of two touchdown passes he received.

But, the Panthers failed to answer any of the Warriors 17 second half points that ended Palmyra’s season at 12-1.

“They’re a quality football team, and I can’t say enough about them and the things they did,” said Coach Kevin Miles. “They had a good scheme, and they’re a good football team.”

Miles was pleased with how his team overcame early adversity to get back into the game in the first half.

“We came back, and we answered,” Miles said. “We thought we had settled in and got things figured out, but we didn’t.”

Miles praised his players for their great season and preferred to take the blame for the loss. 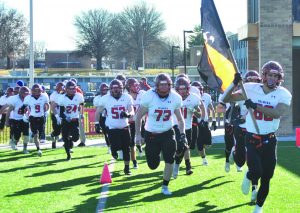 The Panthers enter the field prior to Saturday’s semifinal game at St. Pius X High School in Kansas City.

“I love these kids and what they did. I can’t say enough about them,” he said. “It was on us. The loss was on the coaches, and we didn’t

come through for them in the big game.”

The Warriors took advantage of ideal field position to score twice in the first quarter and take a 14-0 lead they held until late in the half.

A short punt into the wind, gave the Warriors the ball on the Palmyra 23 on their first possession, and they scored quickly on a five-yard touchdown pass from quarterback Jack Mosh to running back Robbie Sharp.

St. Pius X got another ideal chance to score two minutes later when a fake punt attempt by Palmyra ended badly on a fumble at the Panther 29.

The Palmyra defense won the battle though, stopping the drive at the 15 without a Warrior score as Joseph Wilson’s 32-yard field goal attempt went wide left. 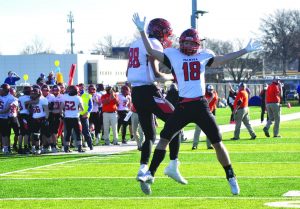 But St Pius was back in business again after a short punt into the wind by Palmyra, and scoring two plays later on a 38-yard pass from Mosh to wide receiver David Deters for a 14-0 lead at the end of the first quarter.

The ball was not placed in St. Pius X territory until two minutes into the second quarter, and Palmyra’s offense did not get past the 50 until 1:31 left in the first half, when the Panthers finally got their offense in gear.

And, it took some razzle-dazzle to get that done, as Palmyra capped an eight-play, 47-yard drive with a successful flea-flicker play on fourth down and six from the St. Pius 24 with 17.4 left on the flock.

Hayes Miller took the ball on a jet sweep to the left, handed it off to Zane Meyers, who flipped it back to quarterback Brody Lehenbauer who had a clear shot to tight end Abe Haerr for the score. 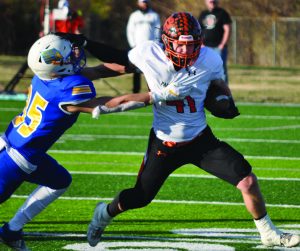 Palmyra’s Wade Begley tries to get away from a St. Pius X defender.

A two-point attempt failed, leaving the Warriors lead at 14-6, but the Panthers gave themselves another shot before the half, when the ensuing on-side kickoff somehow pin-balled though the front line of the Warriors return squad and was recovered by Palmyra’s Aaron Ritchey at the 37 with  16.7 on the

Lehenbauer then completed an 11 yard pass to Colin Arch who went out of bounds to stop the clock.

Then Lehenbauer threw to the end-zone where Haerr, who was being held by a Warrior defender with a yellow flag flying, caught the ball one-handed for a touchdown with 5.1 on the clock.

Palmyra tied it up on a two-point pass from Lehenbauer to Smith, giving the Panthers their 14 points in a dizzying span of just 12.3 seconds.

Unfortunately for Palmyra, that would be all there would be on offense. 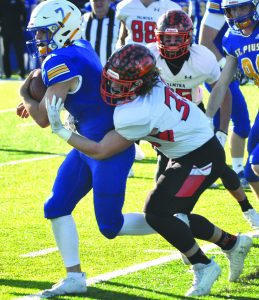 The Panthers managed just 58 yards of offense during four unsuccessful drives in the second half.

Meanwhile, the Warriors scored on their first three possessions, two on short touchdown runs and the other with a 34-yard field goal by Wilson.

St. Pius X kept the Panthers off the field by holding the ball for 40 plays in the second half, while Palmyra managed just three first downs on 16 plays after the break.

Palmyra’s offense was limited to 152 total yards, most of it through the air as the ground game was held to a pitiful 33 yards on 27 carries.

Haerr accounted for over half of the offense with his five catches for 86 yards.

Palmyra’s defense was often on the verge of earning stops in the second half only to have St. Pius X come up with big plays to extend their drives.

The Panthers collected six tackles for losses in the second half, but the Warriors were three of four on third-down conversion attempts.

Even a fourth-down stop by Palmyra resulted in the field goal.

St. Pius X had a balanced offense, collecting 293 total yards, 162 through the air and 131 on the ground while not giving up a single turnover.

Mosh completed 12 of 22 passes for 162 yards, with Deters catching five passes for 95 yards.