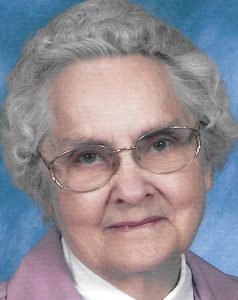 Wilma was a homemaker but worked at the shipyards in Tacoma, Wash., during World War II. She also worked at DeLaPorte Shoe Store and Woolworths in Hannibal for a while.

She loved flower gardening and playing dominoes with her sister, Alice, and anyone who dared to play. She had many fond memories of her time traveling throughout the upper 48 states with her children and family over the years.

Wilma was a passionate and ardent supporter of veterans organizations, law enforcement and first responders.

A woman of faith, she was a longtime member of First Baptist Church of Palmyra. She truly loved to read her Bible and share her faith.

Friends and family are invited to Wilma’s life celebration at a visitation that will be from 10 to 11 a.m., on Tuesday, Dec. 8, at Lewis Brothers Funeral Chapel in Palmyra.

Funeral services will be at 11 a.m., Tuesday, Dec. 8, at Lewis Brothers Funeral Chapel. Rev. Paul Reese will officiate. Burial will follow at Greenwood Cemetery in Palmyra.

The service will be live streamed through her tribute wall at lewisbrothersfuneralchapel.com.

Honorary pallbearer will be Leon Perry.

Memorials may be made to First Baptist Church of Palmyra.

Online condolences may be shared and viewed at www.lewisbrothersfuneralchapel.com.