The PHS varsity boys struggled against their arch nemesis Saturday, falling to the host squad, 58-36, in the Monroe City Tournament title game Saturday.

Monroe City scored the first nine points and really never looked back in building a 34-17 halftime lead and then outscoring Palmyra (3-1) 14-4 in the third quarter. 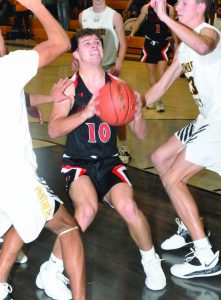 Palmyra’s Zane Meyers draws a crowd in the lane against Monroe City Saturday.

Palmyra now has an 11-game losing streak against Monroe City dating back to Dec. 9, 2017, when Palmyra beat Monroe for the tournament championship.

Palmyra advanced to the title game by trouncing third-seeded Van-Far by 50 points, 77-27, 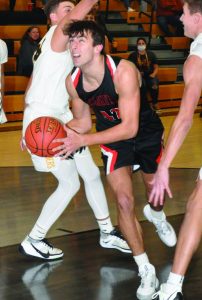 The tone was set from the outset as Palmyra jumped out to a 19-6 lead and went into halftime up by 21.

The Panthers then came out of the break and out-scored 27-9 in the third quarter and cruised from there.

Haerr scored all of his game-high 18 points before the fourth quarter and was joined in double figures by Brayden Shannon, who sank five three-pointers in collecting 17 points, and Bear Bock with 14. 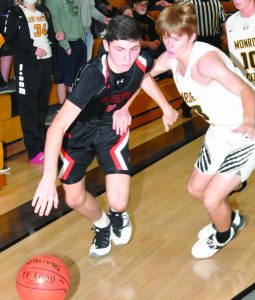 The Panthers opened the tournament with an easy 61-24 victory over seventh-seeded Mark Twain, Tuesday.

Palmyra jumped out to a 14-5 lead, went into halftime up by 22 and rode a 31-point advantage into the final quarter.

Haerr sank nine field goals, one more than the entire Tiger out-put for the night, and finished with a game-high 20 points.

This week, the Panthers are to travel to Mark Twain, Thursday, for a rescheduled game, which was originally supposed to be the season opener Dec. 1.