Editor’s note: this is the first of a three-part series reviewing events in the local area during 2020.

Patrick Barns filed to run for city council from Ward 1, leaving only Ward 3 without a candidate at this point. 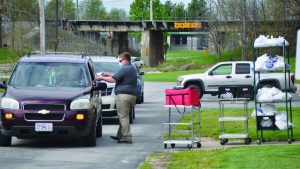 The Palmyra City Council discussed how to address a preponderance of trailers parked on city streets as well as complaints of numerous unlicensed vehicles around the city. It was noted the trailers pose a traffic hazard due to their lack of visibility at night and the narrowness of the streets and by blocking sight lines at intersection.

After a couple of years of working out details the Marion County Commission is ready to hold a public hearing on the proposed changes to its land use ordinance. The changes define the regulations in ways they have not been defined before, making it easier for the Marion  County Planning and Zoning Commission to determine which commercial rezoning request it should be.

Loren Graham, who has served as mayor for the past 14 years, was recognized as the Citizen of the Year during the annual Palmyra Chamber of Commerce banquet, while Mark Lohman, who heads the Pride program at Palmyra High School, was named the Educator of the Year.

The Marion County Commission approved an almost $14 million budget during their meeting. The budget includes a 75 cents an hour raise for employees as well as the county starting to make repayments to the Capital Improvement Fund and the General Revenue Emergency Fund for loans from those funds to help pay for the Taylor bridge.

The Palmyra R-I Board of Education accepted the resignation of Lora Hillman, current elementary school principal, during their recent meeting.

For the first time since 2016, the PHS girls basketball team won the
tony Lenzini championship with the boys came in second, losing to Monroe City.

The 10th annual prom dress resale event was again a success with 67 dresses sold, despite adverse weather conditions keeping the crowd down.

Palmyra High School will play host, for the first time, to a major all-day Quiz Bowl Tournament Saturday. Twenty-one teams from Missouri and Illinois will participate in what is being billed as the Palmyra Academic Winter Showdown.

If all goes well, Marion County will have seven road projects done by the Missouri Department of Transportation in 2020. Those include pavement improvements on U.S. 61 south of Route F to Highway 168 in Hannibal and safety improvements on Route F near Palmyra.

It took Todd Dorsey and Rebecca Calvin 28 years to get serious about marriage, but it also took the Kansas City Chiefs 50 years to win a second Super Bowl. Of course, they are connected. Not long after the Chiefs won Super Bowl LIV Feb. 2, Dorsey knelt down and proposed to Calvin, and she said yes.

Thanks to the generosity of a faith-based nonprofit organization and the time of a local pastor, every student at Marion County R-II School will be receiving a pair of name-brand shoes this spring, through the Convoy of Hope project.

Megan Stone hit her 1,000th point of her high school basketball career in the Lady’s Panthers win over South Shelby.

The Sesquicentennial building in Flower City Park was the site of the annual Daddy/Daughter Dance hosted by the Palmyra Parks and Recreation Department. The event drew a capacity crowd.

Sarah Easton was hired as the new youth program associate for University Extension in Marion County and is making it her goals to learn about the program and expand it.

Mun Y. Choi, president of the University of Missouri System visited Palmyra last week to speak during the Marion  County Extension Council annual meeting, noting the system wants to make a difference and save more lives with its new NextGen Precision  Health initiative.

The annual Pink Out the Gym Night was held Friday with the event raising over $7,500 for the American Cancer Society’s Relay for Life.

A Hannibal Boy Scout is planning to do his Eagle award project in Palmyra by helping improve the Palmyra Greenwood Cemetery by placing 86 section markers to make it easier for people to find the graves of their loved ones.

The Palmyra City Council approved the purchase of a used boom truck for $23,100, from Northeast Missouri Electrical Cooperative. The newly purchased truck has a longer boom, providing more capability for use by the electrical department.

Both the boys and girls basketball teams finished in second place in the Clarence Cannon Conference.

Mayor Loren Graham and Pam Behring, a city council member, placed a bicentennial time capsule inside the wall of what will eventually be the new council chambers at city hall.

The Palmyra City Council approved a contract for a bank ATM to be placed in Flower City Park. HOMEBANK plans to locate a permanent ATM machine near the Sesquicentennial Building.

If the weather cooperates, the remainder of the work to be done on the sports complex at Palmyra High School will be getting underway soon and will cost the district less than anticipated.

Bridgette Ausgpurg, the current assistant principal at Palmyra Elementary School, has been hired as the new elementary school principal for the 2020-21 school year.

Palmyra Middle School shop class is building a Little Free Library for the elementary school to be involved in a nationwide program that helps promote reading through making books more readily available. The library will be located outside the school cafeteria.

The lowest gasoline prices in decades can seem more mocking than welcome during the COVID-19 pandemic as citizens are urged to stay home and off the road in order to blunt the spread of the virus. Gas in Palmyra was 1.65 a gallon.

Both the Palmyra R-I and Marion County R-II school districts have temporarily closed schools for the time being due to the COVID-19 pandemic. Palmyra Superintendent Kirt Malone noted there will be more difficult choices that must be made in the coming weeks.

The Marion County Courthouses were closed to the public until at least April 13, due to trying to reduce the spread of the coronavirus.

Community members have been stepping up to make masks for nurses and area hospitals, including Angi Mulhatten, Marcy Hamilton and Teresa Hettinger.

Due to the COVID-19 pandemic and requirements and recommendations by various federal and state health agency, the Flower Children’s Spring Fling has been postponed.

The United Way of the Mark Twain Area is helping area homebound school students by providing an online reading out-loud program during the COVID-19 pandemic, with new videos posted each week.

The Palmyra Recycling Center now has a new forklift made possible through a grant from the Mark Twain Regional Council of Governments.

While the Palmyra R-I School District will remain closed until through at least May 1, plans continue for the 2020-21 school year with hiring continuing, including Marty Smyser as the elementary school assistant principal.

The Marion County Commission vacated a platted but unbuilt street in Philadelphia during a live streamed meeting.

The 75th anniversary of the tornado that “rocked” Palmyra on April 12, 1945, was noted in a special article.

Despite the fact most teachers and students were entering unknown territory, the online or distant schooling at Palmyra R-I seems to be going fairly smoothly. Distance learning will continue through this school year as Gov. Mike Parson has ordered schools to stay closed through the remainder of the school year.

Unfortunately for the athletes, the closing of schools also means the end of spring sports for 2020.

Community partners are donating 100 hogs, nearly 15,000 pounds of pork, to feed individuals in need in Northeast Missouri, according to the United Way. Joe Kendrick, a Marion County farmer, is spearheading the effort.

The Palmyra R-I School Board adopted the CARES Act Section 125 update and suspended policy to align with COVID-19 emergency legislation and waivers. The adoption will help provide funding to prevent, prepare and respond to the pandemic.

Chris Parsons resigned as the varsity girls basketball coach after eight years, during which time he lead the team to two state quarterfinal games.

The Palmyra R-I School district has revised end of the school year plans in light of the pandemic. Graduation is still planed for Thursday, May 21, but will be held at the high school and under strict social distancing restrictions. The junior-senior program has been reset for June 27, but only if large gatherings are allowed by then.

Tanner Nix, a 2016 PHS graduate, was enjoying working on a cruise ship out of Hawaii before seeing the cruise industry flipped upside down by the COVID-19 pandemic. Nix ended up getting sick and was confined to his room with fever, body aches, cold chills and shortness of breath.

According to Superintendent Jason Keilholz, Marion County R-II principal, most of the students have been able to keep up with work even with often limited internet access.

Marion County R-II seniors will be honored at a senior parade on  Sunday, May 10, the original date of graduation.

Missouri’s state of emergency was extended through June 15.