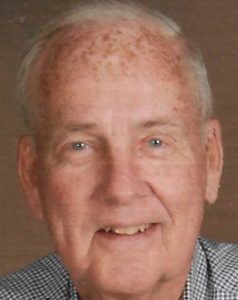 He was preceded in death by his parents; his wife, Jean;  and his brother, Lyle Shaw; in-laws, Everett and Marilyn Tuley, Pat and Jim Drebenstedt, Rhonda Dodd, Marty Stevens and Richard Dodd.

Ralph grew up in McPherson, Kan. He had a strong work ethic from a young age that he carried through his life. He was a 1961 graduate of Kansas State University.

He worked in managerial positions, starting at Safeway Foods, Welch’s and William Underwood; spent 30 years of his career as CEO at Northeast Power of Palmyra, Mo., until he retired in 2004.

He was very involved in his community. He was the past president of NRECA Generation and Transmission Managers Association and member of St. John’s Lutheran Church, Hannibal Country Club and Jackson Park Golf Course. He was instrumental in the implementation of the grass greens at Jackson Park Golf Course in Palmyra and the installation of Zoysia grass fairways at Hannibal Country Club.

He was also the chairman of the Cannon Dam dedication at Mark Twain Lake, and the Industrial Division chairman for the United Way of the Mark Twain Area. Also, he served on the Hannibal Regional Hospital Foundation Board. He helped with the United Way and YMCA fund drives and various boards and committees.

He enjoyed traveling and seeing the world in retirement with Janice. Perhaps his favorite trip was to the Panama Canal.

He was Christian by faith and a member of St. John’s Lutheran Church in Hannibal.

Funeral services will be held at 10 a.m., Wednesday, Dec. 30, at St. John’s Lutheran Church in Hannibal. Pastor Richard Ingmire will officiate. Burial will be at St. Joseph Cemetery in Palmyra.

A visitation will be held at 9 a.m., Wednesday, at St. John’s Lutheran Church in Hannibal.

Memorials may be made to St. John’s Lutheran Church.

The family has requested that masks be worn for all services.