With 2020 barely in hindsight, the new year started out ominously thanks to a first-day ice storm that brought power outages and dangerous travel to the Palmyra area. 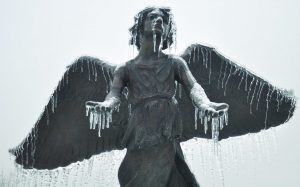 The Angel of Hope in Flower City Park became an ice sculpture thanks to the New Year’s ice storm that coated anything outside with a thick, cold coating.

“I’ve been here 15 years, and this is the worst I’ve seen,” he said of the ice storm that put a  quarter to a third-inch coating on just about everything exposed to the weather.

Abell said wide-spread power outages affected as many as 800 to 900 residents at a time in just about every sector of town.

And while his crews worked to restore power to entire electrical circuits, they were also addressing isolated outages caused by falling branches.

With the ice not melting at all, the BPW was back at it Monday, restoring power to much of Palmyra following a transmission line fail.

Even with thawing as Monday went along, Abell said he was concerned about more power outages as sagging branches began to bounce back up and hit power lines.

“Until all the ice melts, it’s going to continue being a problem,” he said.

Residents’ calls about downed lines and power outages too numerous to count, and Abell said his department did its best to address the outages as quickly as possible. But he indicated some people were out of power longer than others.

“We pretty much worked on ones affecting the most people at a time,” he said.

Abell expressed thanks to all those who helped out with the situation, including utility crew members from other departments and the city street department as well as police and fire department personnel and Marion County 911 dispatching.

The ice caused major damage to a large number of trees in Palmyra with some large ones or large branches coming down and blocking streets and damaging property.

As a result of the amount of broken branches, the city opened its burn site for branch hauling.