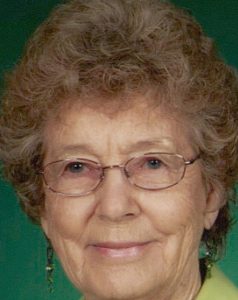 Survivors include her son Ricky (Denny) Swisher; nephew, Darrell (Vicki) Denish; grandchildren, Matthew Gregory (Brenda) Swisher; great-grandchildren, Claire Renae Swisher and Colt Matthew Swisher; brother, Lad Denish. There is an extended family of nieces, nephews, and their children who are all much loved.

During WWII she was a secretary at a plant which manufactured B17 Bomber wings in Rockford, Ill. After the war, Sue and Maynard returned to the family farm east of Philadelphia. They farmed with his father, E. N. Swisher, later purchasing the property. In 1998 they retired from farming and moved to Palmyra.

She attended Culver-Stockton College, earning a teaching degree. She taught sixth, seventh and eighth grades for many years at Marion County R-II School. “I was blessed to be with young people and taught grades seven and eight for 17 years, and after the school burned, sixth grade for another 17 years. It was a joy and a privilege.”

She was a member of the Philadelphia Baptist Church, joining in 1941. After moving to Palmyra, she and Maynard attended the First Baptist Church of Palmyra.

Following in the footsteps of Maynard’s mother, who was a charter member of the club in 1920, she became a member of the Prairie Sunshine Club of Philadelphia, attending meetings until 2015. She remained in close contact with many of the members, her lifelong friends.

“NO TEARS. I’m moving into a mansion.”

A graveside service will be at 10 a.m., Thursday, Jan. 14, at Philadelphia Cemetery in Philadelphia, Mo. Rev. Eric Anderson will officiate.

There will be a gathering for respects at 9:30 a.m., Thursday at Philadelphia Cemetery.

Memorials may be made to Maple Lawn Auxiliary.