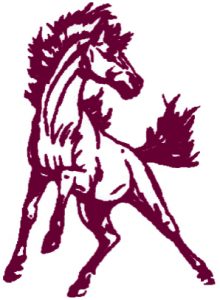 Marion County shot just 36 percent from the floor, but sank four three-pointers and 11 of 19 free throws.

Spencer Whetstone and Root Cheney combined to hit three of the treys and led the team with 16 points, while Cooper Stotts also broke into double figures with 10 points.

Nine of the Mustangs’ 19 field goals came from outside the arch.

Chaney sank three treys and led the team with 16 points, while Stewart also shot three and finished with 13 points.

The Mustangs ended the week with a 90-42 loss at Novinger Friday.

Marion County fell behind 22-9 in the first quarter and never recovered.

Whetstone was on fire from outside, sinking five of eight three-pointers and leading the team with 21 points.

This week, the Marion County boys were scheduled to host Wellsville-Middleton, Monday, and travel to LaPlata, Thursday.

The Mustangs learned last week they will travel to Green City for this year’s Class 1, District 11 Tournament which will also include Atlanta, Brashear, Green City, LaPlata, North Shelby and Novinger.