It was a perfectly matched game until the fourth quarter when the Tigers won it with a 17-13 game-ending run. 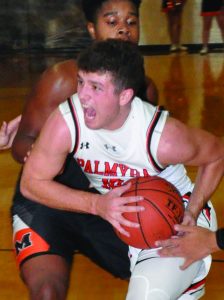 Palmyra’s Zane Meyers drives to the basket against Macon.

The Panthers had to settle for the third place game after  a tough 49-48 loss to the host team in the semifinals Thursday.

Trailing by six at the half, Palmyra went on a 15-7 third-quarter run only to have the game slip away down the stretch.

The Panthers cruised to victory in the quarterfinals, topping eighth-seeded Scotland County 63-24 Tuesday.

This week, the Panthers are scheduled to host Knox County, Tuesday, and Centralia, Friday.

Monroe City,  which has traditionally been in the same district, is in Class 3, District 7.