Editor’s note: Farm for Life is an editorial series by the Missouri Department of Agriculture.

When Tyler Haerr started college at Kansas State University, he had no plans of going back to his family’s farm in Taylor, Mo. 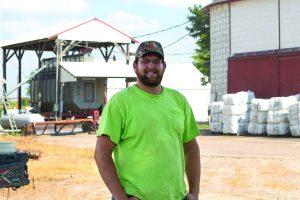 Tyler Haerr is pictured at his family’s farm in Taylor. (Contributed photo)

As the fourth generation farmer got closer to graduation, the opportunity to get back to the family farm was one that he simply could not pass up.

“When I went off to school, my dad implied there was not going to be a spot for me here on the farm for several years because of him, my uncle and my grandpa all farming together at the time,” Haerr said. “But in my junior year, my dad told me there was going to be a spot back here for me if I wanted it, and it just kind of worked out.”

The Haerr family farms a few thousand acres of crop ground near the Mississippi River in northeast Missouri’s Marion County.

Along with their row crops, Haerr has incorporated an Angus cattle genetics business, known as seedstock, into the family’s diversified operation.

“My great-grandpa moved here from central Illinois long before I was here, and we’ve been farming ever since,” said Haerr.

Growing the cattle side of their farming operation was important to Haerr when he came back to the farm, especially since it created additional diversification for their farm.

“You never know what the markets are going to do,” Haerr said. “Diversification really helps us spread the risk out and better manage our operation.”

After attending college in Kansas, Haerr realized how special Missouri agriculture really is.

The diverse terrain the state has to offer lends itself well to both row crops and raising livestock, which suits the Haerr family’s farming operation perfectly.

“We try to get things done really efficiently,” Haerr said. “The biggest thing dad’s taught me is just a really good work ethic. We talk for hours every day on what’s the best way to do something, making sure we’re not missing a step and trying to make as few mistakes as possible.”

Haerr knows what sets their farm and cattle seedstock business apart from others, and it fits perfectly into their overall farming philosophy.

“What we’re shooting for on this farm is the combination of quality and quantity,” Haerr said. “We’re trying to create a product that is pleasing to the consumer as well as pleasing to look at in the pasture. It’s fun to create and match the genetics that not only taste good, but they’re also fun to look at when you drive by.”

Haerr knows that not everyone understand the commitment farmers have to this way of life.

“I think farm for life means that most farmers don’t quit farming until they die,” Haerr said. “They’re usually in it for the long haul, it’s not just a way of life. Here on the farm, your hours are dictated by the weather and what needs done at the time. You really have to want to do what we do; it’s not for everyone, but it is fun if you enjoy it.”