The PHS varsity boys basketball team snapped a three-game losing streak with a 55-51 victory over Centralia on the home court Friday. 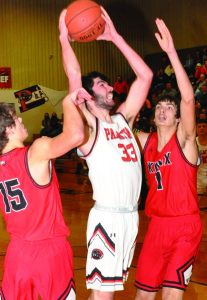 Palmyra’s Quade Plunkett goes to the board during action against Knox County last Tuesday.

The Panthers (5-4) got on a roll early to build a 20-9 first-quarter lead and then held their opponents off the rest of the way.

Zane Meyers had the sharp hand, sinking five three-pointers on his way to a game-high 18 points.

Bear Bock scored 12 of his 13 points in the first half, while Quade Plunkett found the range for three three-pointers and scored 11 points.

The Panthers lost at home last Monday to Knox County, 44-37.

Palmyra managed just eight first-half points before out-scoring the Eagles 29-20 in the second half.

Plunkett sank two of the team’s three three-pointers and led the team with 16 points.

The Panthers were scheduled to open this week’s Tony Lenzini Tournament Tuesday against Canton.