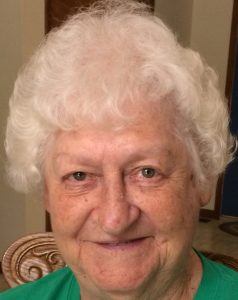 Irene was a wonderful homemaker and had owned and operated her own flower shop, Flower City Florist.

A beautiful, kind woman, her children, grands, and great-grands were her life! She enjoyed going to their ballgames. Being outdoors with her plants and creating floral designs brought her great joy long after closing her shop.

The funeral service will be live streamed through Lewis Brothers Funeral Chapel. Follow the link on their obituary page or go to https://my.gather.app/family/irene-riney. The live stream will start shortly before the service begins and is available indefinitely through his personal link.

Honorary pallbearers will be Julie and Jill Redd, Amber and Zandy Gottman, Heather Kite, Bethaney and Jason Wisehart, Karley and Kayla Riney, Mackenzy Hess and Kaley Augspurg, her great-grandchildren and Olav Skinness of Norway, a former foreign exchange student of the family.

Memorials may be made to St. Patrick’s Cemetery or the Irene Riney Memorial Fund to benefit local youth.