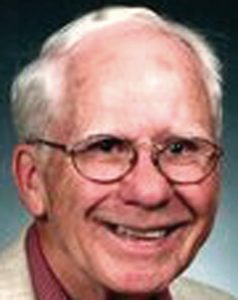 He was preceded in death by his parents, Stella Wells Lewis and John Best Lewis; his first wife, Ruth Lewis; and daughter, Janet Lewis.

Bob was a World War II veteran of the United States Navy, where he served on the USS Pine Island. Later in life, he enjoyed immensely his trip on the Honor Flight to see the memorials in Washington, D.C.

He was an active member of Speedway United Methodist Church where he sang in the choir, taught adult Sunday School classes and served on numerous committees throughout the 65 years that he worshipped there.

Bob also participated in Toastmasters International, where he was known for his humorous speeches. He was a former member and president of the Chapel Hill Lions Club, and an avid member of the Indianapolis Scientech Club where he enjoyed regular discussions in the fields of science and technology.

Bob attended Culver-Stockton College and the University of Missouri for his undergraduate studies, and then attended Iowa State University where he earned his master’s degree.  After which, he was a mechanical engineer for nearly four decades at Allison Gas Turbine in Indianapolis.

After retirement, he enjoyed traveling internationally with his wife.

Public visitation will be held Tuesday, Jan 26, from 11 a.m. to 1 p.m. at the Speedway United Methodist Church, followed by a private service for family members.  Burial will be in West Ridge Park Cemetery.

Memorials may be made to the Chapel Hill Lions Club in care of Conkle Funeral Home in Indianapolis, Ind.