Palmyra (8-5) was within striking distance, trailing by seven points going into the second half, but Monroe City turned it on with a 38-15 run to win the Tony Lenzini Tournament Championship for the third year in a row. 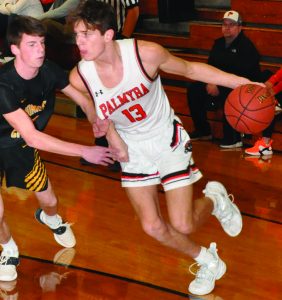 Palmyra’s Aaron Stamper drives toward the lane against Monroe City.

Held to a collective 12 points in the first half, Monroe City’s Joshua Talton and Lance Buhlig fed the second half rally. Talton scored 13 of his game-high 22 points after the break while Buhlig contributed all but three of his 14 points down the stretch.

Palmyra managed to sink just five second-half field goals and were only five of 11 from the line in the game. 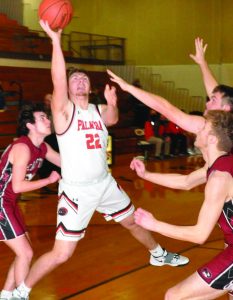 Palmyra’s Adam Goodwin goes up for two during his team’s win over Canton Tuesday.

Palmyra advanced to the championship game with an exciting 48-47 win over third-seeded Hannibal Thursday.

The Panthers used a 20-15 second quarter run to take a six-point lead into halftime.

Hannibal narrowed the gap to four going into the final period when Palmyra managed to hold the Pirates back.

The Panthers had little problem in winning their first-round game, 64-43, over seventh-seeded Canton Tuesday.

Meyers sank two three-pointers in helping Palmyra get out to a 22-11 first-quarter lead.

Palmyra went into halftime with a 41-20 lead before icing the game with a 22-7 third-quarter run.

The Panthers were scheduled to compete this week at at home against Brookfield, Tuesday, and at Macon, Friday.