The Marion County Commission will be trying to address a storm water drainage issue at the Palmyra Courthouse, meeting with the city and an engineering firm to discuss the situation. 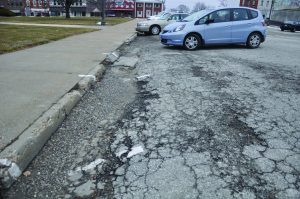 Poor storm water drainage has caused the street pavement on the south side of the courthouse to crack and crumble.

The problem with the storm water drainage stems from the water running down the alley across from the south side of the courthouse, crossing the street and tearing up the curbing and street on Lafayette Street before continuing down to Dickerson Street, where it sits.

Plans presented by Bross would include installing drop inlets and pipes on Lafayette Street across from the alleyway and on Dickerson Street to drain the water to the inlet on the northwest corner of the courthouse.

Upon discussion, a third inlet, on the south side of Lafayette Street across from the courthouse at the bottom of the alley was also considered. The additional cost for that was estimated at $5,000 to $6,000.

Work would also include replacing curbing and some asphalt, although Bross said he did not think the entire street would have to be asphalted.

Since the total for the project is under $75,000, the county would not have to pay prevailing wage, and Dornberger indicated the city should be able to do most of the work, although neither the city nor the county have an asphalt spreader.

In addition, Bross said since the gravel will need to be compacted where the asphalt would be replaced, he was unsure what work might need to be done there. If it needs dug out, it could cost an additional $2,000-$3,000 for that.

Since the city does have a master plan for storm water drainage, Mayor Graham indicated it might be possible for the city to do some cost-sharing on the project, especially some in-kind work. 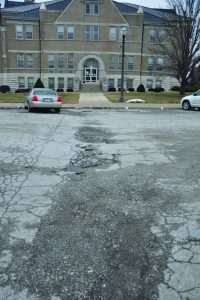 Storm water flows across Lafayette Street, causing it to crack and crumble.

Feeling it might qualify, especially from a safety issue, Western District Commissioner Steve Begley said he plans to check into the possibility of a Community Development Block

Grant (CDBG) to see if funds can be secured for all or part of the project.

If the county qualifies, and indications are they might get a grant, the project would probably be put on hold until funds are secured.

If that is not the case, the plan is to get to work on the project as soon as possible.

In other business, Teya Stice, county improvement coordinator, reported she had contacted nine counties and had not heard back from any concerning a trade of soft-match funds for BRO (hard match) funds.

She indicated she plans to call St. Louis County this week, but requested information on how much soft match the county wants to trade.

After some discussion, it was decided to trade $600,000 if possible, getting the best possible trade.

Stice also reported Chuck Smith, the county’s field representative for planning and zoning, had quit to take another job.

Applications to fill that position will be taken until Feb. 17.

She also noted the new audio system for the Palmyra courtroom will be installed next week, and the new plat books will be available this week.