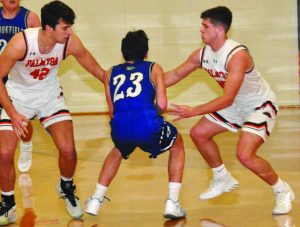 The Panthers (9-7) got out to an 11-5 lead before trailing by five at the half but staged a 14-11 comeback in the third quarter before the Tigers out-scored them 13-6 down the stretch.

Zane Meyers sank two three-pointers and all four of his free throws and led all scorers with 18 points.

The Panthers began the week with by cruising to a 63-20 win at home over Brookfield last Tuesday.

Palmyra jumped out to an 18-0 lead and went into halftime up 42-10 against a Bulldog squad that dressed out just six players.

The Panthers were scheduled to continue Clarence Cannon Conference action this week by hosting Clark County, Tuesday, and traveling to South Shelby, Friday.