The Lady Tigers trounced Palmyra, 56-21, in Macon Friday, shutting out the Lady Panthers 16-0 in the first quarter. 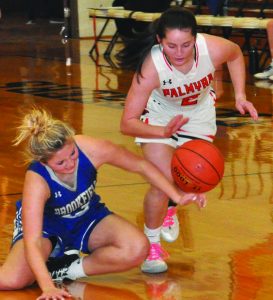 Palmyra’s Abbey Redd tries to keep possession of the ball during action against Brookfield last Tuesday.

Palmyra out-scored Macon 12-7 in the second quarter, before the Lady Tigers took control with a 33-9 second-half run.

The Lady Panthers pulled out a 36-32 win at home over Brookfield to start the week last Tuesday.

The Lady Panthers led 13-7 early but went into half time up by just one. And it remained that close until the final minute when Palmyra turned it into a two possession game.

White sank three of four free throws and a field goal to account for five of the team’s eight fourth-quarter points, and lead all scorers with 12 total points.

The Lady Panthers were scheduled to continue Clarence Cannon Conference action this week at home against Clark County, Tuesday, and at Macon, Friday.