Two persons, including one from Palmyra face felony drug charges following a search of a vehicle in Palmyra last Wednesday.

According to the Palmyra Police Chief Eddie Bogue, Betty M. Bates, 41, of Palmyra, and Daniel Slavin, 61, of Gibbs, Mo., are being held in the Marion County Jail awaiting court hearings. 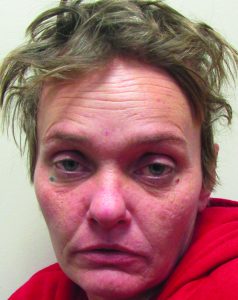 Bates is charged with two Class D felonies, one Class C Felony and one Class E felony, possession/delivery of a controlled substance and unlawful use of a weapon.

Slavin is charged with possession/delivery of a controlled substance and drug paraphernalia, one Class C felony and one Class D Felony.

Bogue said the arrests came about after one of his officers observed suspicious behavior of two individuals at the Abels Quick Stop, 101 N. Main St. at about 7:42 p.m. Wednesday.

With the assistance of  Marion County Sheriff’s Deputies, officers were able to make contact with the individuals.

Bogue said that, in the course of the investigation, it was learned Bates was in possession of marijuana after the Marion County Sheriff Department’s canine alerted on the car the subjects were in.

A search of the vehicle revealed a total of 39 grams of marijuana and 24.5 grams of methamphetamine located on the person and in the vehicle occupied by the subjects.

Officers arrested Slavin, the  operator of the vehicle, who was also found to be in possession of marijuana and methamphetamine.

Both suspects were transported and placed on a 24-hour hold at the Marion County Law Enforcement Center until warrants were issued.