The Palmyra City Council last Thursday awarded the bid for repair of two of the city’s water well pumps damaged by flooding in 2019 at a cost of $790,700.

Bleigh Construction was the winning, low bidder out of five for the project, with the bids ranging as high as $915,855. 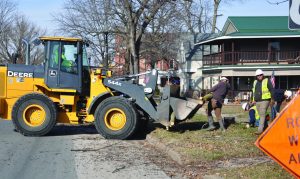 City employees remove tree limbs along Main Street Wednesday. The clean-up was continuing after the recent ice storm damaged trees all over Palmyra.

Brent Abell, Board of Public Works  superintendent, said Bleigh’s bid, which came in under the engineer’s estimate, was recommended by the board during a meeting prior to the council meeting.

The bid was approved by a 5-0 vote of the council.

Abell said the BPW was hoping to also include the purchase and installation of generators for the two wells, but they had to be cut out of the bid due to the cost.

However, Abell also said the BPW is hoping to add the generators in the future when funding allows.

The city is expect to recoup 75 percent of the cost of the repairs through FEMA funding. But the city will have to foot the entire bill initially until that emergency funding comes through.

Both wells will be raised above 100-year flood level.

Bleigh will have six months to complete the project.

“We want to get it done quicker the better,” Abell said.

Loss of the two wells cut the city’s water supply availablility in half, with two others wells in the Mark Bottoms still in operation.

In other, business, Council member Earl Meyers reported the Personnel Committee he chairs met to finalize revisions to the city’s employee handbook.

He said the committee will get one more opportunity to look over the revisions before recommending them to the council for approval.

City Street Commissioner Austin Dornberger reported his crews had all but completed cleanup efforts of downed trees and branches resulting from the recent ice storm. He said the city burn site will be secured within the next two weeks.

Mayor Loren Graham said the city cemetery will be contacting Dornberger about some tree work needed there. Dornberger said it amounts to grinding some tree strumps.

Graham also indicated the cemetery board may come to the council to revise the current agreement with the city about tree maintenance.

He said a person made an official complaint after getting bit by a dog and the owner has a certain amount of time to appeal a vicious dog designation.

Abell notified the council the BPW has purchased two light towers used for emergency utility work during the night. The purchase was made so that the BPW will no longer need to rent the equipment.

City Attorney James Lemon reported on progress to transfer the municipal court to the circuit court.

Council member Brock Fahy asked the council to continue efforts to make infrastructure improvements, such as outer roads along U.S. 61 to help with economic development efforts.

He also recommended the city work with Corey Mehaffy and the Hannibal Regional Economic Development Council on downtown revitalization efforts.