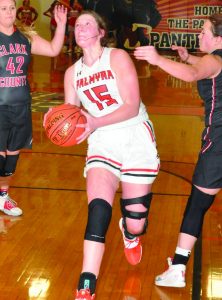 Palmyra found their offense to score 31 points in the second half, but it didn’t make a dent in South Shelby’s 33-point total.

The Lady Panthers are 1-4 in contests against conference opponents with games remaining against Monroe City and Highland.

The Lady Panthers made a comeback, but it fell short in a 40-33 loss at home to Clark County, Tuesday.

Trailing by eight going into the final period, Palmyra got to within four before Clark County hit two three-pointers to pump up their lead again.

McKinney led all scores with 19 points with six of them coming in the fourth-quarter surge.

Also scoring for Palmyra were Abbey Redd, five, White, three, and Krigbaum, Lake and King each with two.

This week, the Lady Panthers were scheduled to host Monroe City, Tuesday, and then traveling to Bowling Green Friday.