Mrs. Kathryn Ruth Olson Bier, beloved and cherished mother, grandmother, great-grandmother, friend and companion, returned home to Jesus on Feb. 10, 2021, at her home in Hannibal, Mo., at the age of 96.

Kathryn was born July 22, 1924, on Bay Island north of Hannibal, Marion County, Mo., to Clarence E. and his wife Anna May Burditt Olson. She graduated from Hannibal High School in 1942 and later in life continued her love of learning at Hannibal-LaGrange College. 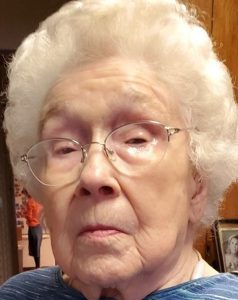 She married Howard Milton Bier on April 28, 1943, in Palmyra. Together they raised their children on the family farm in Hannibal, after Mr. Bier returned from the European Theater in World War II.

They owned and operated the Howard M. Bier Company until Mr. Bier’s death in 1991.

Kathryn was a longtime member of the First Baptist Church of Palmyra, where she served as the first female trustee, a position she held for two terms. She enjoyed helping prepare and host the ongoing Wednesday Night Suppers held at the church. Her strength in her beliefs is helping support her family during this time of mourning.

Kathryn was a member of King’s Daughters, a past member of the Women’s Club of Hannibal, a volunteer for the Hannibal Regional Hospital Auxiliary and Country Wives Extension Club and a very active 4-H leader.

Kathryn loved to travel, and through the years has visited most of the countries in Europe and Asia, as well as Africa, Australia, and other pacific islands.

She looked forward to the annual mother-daughter trips where much time was spent pursuing the next amazing antique find; Kathryn never met an antique store she could walk past.

A private family funeral service will be held at 10 a.m., Monday, Feb. 15, at Lewis Brothers Funeral Chapel in Palmyra. Pastor Paul Reese will officiate. Burial will be at Greenwood Cemetery in Palmyra. There will be no visitation scheduled.

The funeral service will be live streamed through Lewis Brothers Funeral Chapel. Follow the link on Kathryn’s obituary page or go to https://my.gather.app/family/kathryn-r-olson-bier

The live stream will start shortly before the service begins and will be recorded and be available anytime after the service as well.

Memorials are suggested for the Hannibal YMCA or the Marion County Library Sub-District #1 in Palmyra.