The Palmyra Police Department is preparing to revive the local D.A.R.E. program.

The department dropped out of the nationally recognized drug awareness and prevention program for middle school students back in 2008, but the stars appear to be re-aligning for a fall start up. 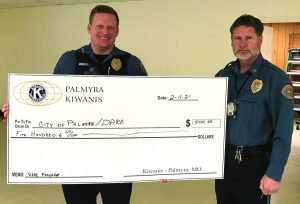 Palmyra did not have an officer willing to commit to the training and time required for leading a successful D.A.R.E. program, that is until now.

The department and the Palmyra R-I School District have teamed up the past few years to fund a school resource officer to provide extra school security.

Cpl. Patrick Anderson has served in that roll and is now taking training to add the D.A.R.E. program designed for fifth graders.

“Since Cpl. Anderson has been the SRO, which spends a lot of time at the high school, I felt this was an established program where he could be more involved with the middle school students, building a relationship with all students and not just the older ones,” said PPD Chief Eddie Bogue in explaining the D.A.R.E. re-start.

“I feel it is a great addition to the curriculum the students already receive,” said Anderson, who indicated he is “extremely excited to be bringing the D.A.R.E. program back to the district.”

And Anderson described his ambitious goals for the program.

“I would say the main goal of this program is to teach the students the tools to make good decisions when presented with a multitude of situations they may encounter in their life,” Anderson said. “Whether it be a small matter such as whether to stay up late on a school night or a large one such as whether to go to an underage drinking party.

“This program shows students the process and steps needed to make clear and well thought out decisions that will hopefully set them up for success in their lives.

“I want the students to leave the program knowing they have the tools capable of making good decisions as they get older.”

Another goal is to continue building on relationships with students.

“The D.A.R.E. program gives me the unique opportunity as SRO to teach a course of instruction,” Anderson said. “Being able to be with the entire fifth grade class, while in the early stages of the middle school, allows me to build a greater level of rapport with them that would otherwise be more difficult in my normal SRO duties.”

That is even more important  now, he said, in a time when police actions are called into question on a regular basis.

“Police officers are sometimes shown in a bad light and in some cases deservedly so,” Anderson said. “Being in this position as SRO and now D.A.R.E. officer, I have the unique opportunity and responsibility to show our youth that police officers are everyday people, just as they are and help bridge any gap between police and their community.

“Also, with a little luck, I may be able to be a good example and influence for a young person to pursue the field of law enforcement.”

Like just about everything else, D.A.R.E. has evolved over the years since 2008.

“It has changed with the times,” Bogue said.”It used to be focused primarily on drug awareness and resistance, and now it covers topics such as bullying and cyber crimes and other topics where our society has evolved.”

D.A.R.E. over the years has had critics who contend the program has not been as effective as hoped, but Bogue believes it has value, in particular by helping forge positive relationships between police officers and the public.

“I think the D.A.R.E. program can be very affective,” Bogue said. “It shows kids at an early age that police officers are just people too and have lives like everyone else. Building trust, showing empathy and instilling good morals and values is important, especially now with technology and society changing nearly every day.”

Being added for the program this time will be a special D.A.R.E patrol car.

“The D.A.R.E. patrol car is a very unique way for a police department, school district and community to show its support for the program and the students involved,” Anderson said. “Having a dedicated patrol car in our fleet with a D.A.R.E. sticker package, which the car will be wrapped in, shows how important our department and city feel this program is for the youth.

“Another great aspect of getting this car is that I will be seeking the assistance of this year’s fifth grade class in designing the sticker package which the car will be wrapped in.”

Anderson said he has begun a campaign for the 2021 spring semester, reaching out to local and area businesses to raise funds to offset the cost of the vehicle.

“I have set a goal of $10,000-$15,000 for this campaign,” he said, noting he has started sending out and hand delivering donation letters to businesses.

“But, I am sure I have missed some along the way,” he said. “If anyone would like to donate to this endeavor, any size donation would be very much appreciated and accepted at the police department.”

All check donations  will need to be made payable to “City of Palmyra/D.A.R.E..”