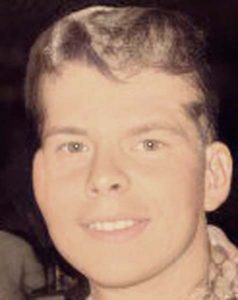 James was also preceded in death by his father.

Mike was a graduate of Hannibal High School Class of 1964.

He was a United States Air Force veteran, serving his country proudly in the Korean Conflict as well as the Vietnam War.

Mike enjoyed watching his favorite westerns on T.V. like Gunsmoke and especially anything that featured “The Duke”, John Wayne. He also loved listening to country music. The tunes of Hank Williams Sr. and Alan Jackson were synonymous with Mike.

The term “man’s best friend” held true for Mike as he loved his dogs. He also loved his quarter-horses. Mike liked riding his horses, but he also enjoyed sketching them. He was a talented artist who hand-drew detailed portraits of his horses and dogs. Crafting knife blades and handles from scratch was another one of Mike’s favorites.

Mike attended Standing on the Rock Ministries in Hannibal. His conviction and faith were very strong.

Mike was a proud and dedicated A.A. member for 44 years.

Professionally Mike worked as a blaster at the Continental Cement plant, retiring in 2008.

Funeral services will be at 10 a.m., Friday, Feb. 26, at the James O’Donnell Funeral Home in Hannibal.  Rev. Jamey Dyke will officiate. Burial with full military rites by Emmette J. Shields American Legion Post #55 will be at Grand View Burial Park in Hannibal.

Friends and family are invited to Mike’s life celebration at a visitation that will be from 5 to 7 p.m., Thursday, Feb. 25, at the funeral home.

If you plan on attending the visitation or funeral services, please wear a mask and practice all COVID-19 physical distancing guidelines.

Memorials may be made to Northeast Humane Society or American Society for the Prevention of Cruelty to Animals (ASPCA).