The Marion County R-II girls basketball team ended its season with a 62-38 loss to North Shelby in the Class 1, District 11 title game in Shelbyville Friday. 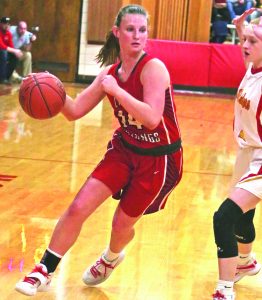 The Lady Mustangs were out-scored in ever quarter and trailed by 12 at the half.

The Lady Mustangs reached the championship game in dramatic fashion with a 58-57 overtime upset of second-seeded LaPlata on the road Wednesday.

The outlook appeared grim for Marion County which trailed by six at the half and by 14 going into the final period.

But Straus scored six of her game-high 20 points and the team sank six of seven free throws as part of a 19-5 run the extra period.

Straus sank a field goal and a free throw, and Tristen Holt also scored a two-pointer as Marion County edged LaPlata 5-4 to win it in overtime.

The Lady Mustangs advanced to the semifinals with a 56-39 win over sixth-seeded Brashear in the quarterfinals Monday.

Straus scored 10 of her game-high 30 points in the team’s 21-8 first-quarter run, and the Lady Mustangs held that 13-point edge going into the second half, when they pushed their lead to 19 going into the final quarter.