The PHS varsity girls basketball team saw its season end with a 46-34 loss to Clark County in the Class 3, District 6 championship game in Kahoka Saturday. 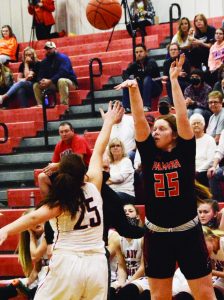 Palmyra’s Candra King shoots from behind the arc against Clark County Saturday. (Photo courtesy of the Clark County Media)

Palmyra (8-14) trailed by just three going into the final period before Clark County went on a 15-6 run to win going away. 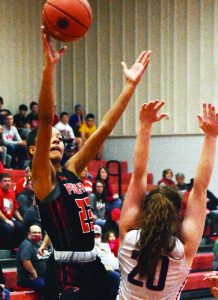 The Lady Panthers reached the championship game with a 47-35 upset victory over second-seeded Elsberry on the road, Thursday.

Trailing by three at the half, Palmyra moved ahead by two going into the final quarter when they outgunned Elsberry 22-12 to win going away.

King scored 10 of her game-high 18 points during the late-game surge.

Also scoring for Palmyra were White, 12, McKinney, 10, Krigbaum, six and Redd, one.

The Lady Panthers advanced to the semifinals with a 60-12 win over sixth-seeded Louisiana Tuesday.

McKinnney scored 10 of her game-high 12 points during team’s 14-2 first-quarter run.