The PHS varsity boys basketball team held back Highland for a 38-37 win an the school’s first district basketball title in seven years Friday in Ewing. 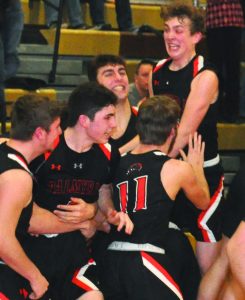 The Panthers begin to celebrate their district title win over Highland Friday.

The second-seeded Panthers (14-8) led by six going into the final quarter, but had to hold off a strong finish by the top-seeded Cougars, who missed a free throw in the closing moment of the game, that might have pushed the contest into overtime.

Bear Bock’s drive to the basket for two barely into the last minute proved to be the game winner.

Palmyra advanced to sectionals and was to play Christian High School (19-5) in O’Fallon, Tuesday. Results of the game were not available in time for this issue.

The winner of that game advanced to the quarterfinals and play this Friday against the winner of Tuesday’s sectional between Monroe City (24-2) and Linn (16-7).

The quarterfinal winners advance to the MSHSAA Basketball Championships in Springfield March 12-13.

Friday’s victory was Palmyra’s second at Highland in seven days after winning the regular-season finale at Ewing, the previous Friday. 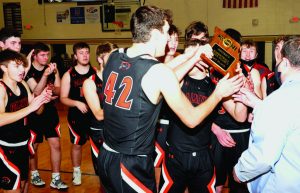 The title game was a back-and-forth, defensive affair early on, but the Panthers managed to go into halftime with a four-point lead after

limiting Highland to six field goals, all within the arc.

Bock, a freshman, scored 10 of the Panthers’ 20 second half points and led the team with 15 overall, while, Alex Loman came off the bench to sink two three-pointers and both of his free throws in scoring 10 points.

The Panthers surged away from Louisiana in the second half for a 53-35 semifinal victory Wednesday.

Stamper and Meyers both sank three treys and the led the team in scoring with 14 and 13 points respectively.

Third-seeded Louisiana advanced to the semifinal with a 72-35 in Monday over sixth-seeded Mark Twain.