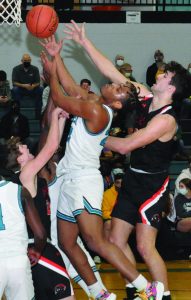 The Eagles, featuring a fast-paced and aggressive game at both ends of the floor, scored six points before the Panthers could get the ball into their end of the court en route to a 17-6 lead after one quarter and a 39-17 halftime edge.

Despite dim prospects to come back, the Panthers fought hard to avoid a turbo clock and even out-score their opponents, 28-26 in the second half.

The Eagles (20-5) saw their season come to an end three days later in the quarterfinals when they lost Friday in a 51-49 thriller.

Monroe City (26-2) advances to the semifinals this Friday, when they play in Springfield and play Summit Christian Academy (21-4).

The Panthers ended the season with a 14-9 record that included the program’s first district title in seven years along with two other tournament title game appearances.

Meyers sank four of the team’s six three-pointers and led the team with 14 points, while Haerr had six and Stamper four.

The Eagles hit six of their 10 three-pointers in the first half, including several from well outside the arc.

In Class 3 sectional action Wednesday, Clark County defeated Duchesne, 42-22, but then fell in the quarterfinals Saturday to Tipton, 60-46.