Despite last year’s lost season, the PHS girls track and field team has strong interest going into the spring campaign.

Coach Nicholas Koetters said there are 36 out this year. 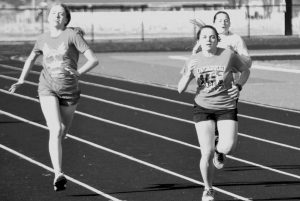 Three members of the PHS girls track team warm up for the spring season Friday.

“I think this is our largest group,” said Koetters, who indicated only about four or five of last year’s athletes did not return.

“And a large number of freshmen going out has helped keep our numbers up,” Koetter said.

This year’s team is a lesser known commodity for the coach after not seeing them in action, but Koetters does have some athletes with known talents, including Jansen Jeutte, a junior, who went to state in the triple jump as a freshman.

“And I believe she has the ability to do very well again this year,” Koetters said.

Others expected to make important contributions include:

Drew Billups, a senior shot put and discus thrower. “I thought she would have had a big year last year for us throwing, so I’m excited to see what she does this year going forward,” Koetters said;

Abbey Redd, a sophomore pole vaulter. “She works very hard at it, and I believe she can perform at a high level this year,” Koetters said; and

Mallory Sublette, a sophomore. “She did well in middle school, and I was looking forward to coaching last year,” Koetters said. “She has looked good so far early on and could excel in multiple events.”

Koetters is also hoping the distance program builds off of the success shown during cross country season and helps the team as a whole.

“I am honestly looking forward to a lot of what these kids have to offer this season,”  Koetters said.

Meanwhile, Koetters said he has some extra evaluating to do to learn just what kind of talents his team has.

“One of the biggest things is getting back into the groove of things,” Keotters said. “Not competing in that long, not going through the season and growing as athletes will make it hard to know what to expect from some of the girls this season.”

Koetters said he does see a higher level of excitement going into the first season since 2019.

“You don’t know how much you will miss something until you can’t do it, and I think that is the feeling this year a little,” Koetters said. “I know it can be a long season and track isn’t as glamorous as other sports, but we have a lot of kids who really like it and look forward to it.

“I believe a lot of kids were really hurt last year when we didn’t have a season, and I’ve told them they need to use that as a lesson never to take anything for granted.

“They need to take advantage of each day they are given.”

The team is also itching to really utilize the new track and field facilities as well.

“I can’t thank the school and the community enough for what they have done to make this new facility possible for us,” Koetters said. “They have done a tremendous job of making it top notch, and we hope that having the ability to be able to train each day on it will allow us to get better.”

But, who knows where the excitement and new facilities will take the team after a long layoff?

“I honestly don’t know,” Koetters said. “Being a year removed, it feels like I don’t know what half the athletes can actually do, and the ones I have seen, it seems like it was so long ago I’m not sure what to expect from them now.

“I believe we have a good team that can do well. We have a lot of athletes out who did multiple sports, and that’s important to me.

“I want kids to not only compete for me but I like seeing kids compete in as many sports as they can for Palmyra.

“I think the more you do, the better it will make it overall as an athlete.  And, since we have so many girls who are in their third sport this year, I think we have a very athletic group.

“With our large numbers as well we can fill all our events and hopefully do really well when we compete at meets this year.”