Ryan Wood announced he is stepping down as PHS boys varsity basketball coach after five years so he can devote more time to his family. 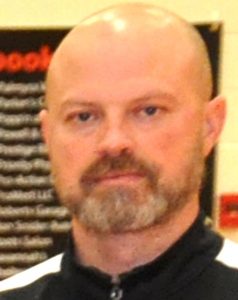 “The biggest reason for stepping down is to free up my schedule so I can attend my own kids’ games,” said Wood, who has some growing hoops talent in his family.

Daughter, Olivia, will be a senior next year, and son, Mason, a freshman, at Marion County R-II School.

“I feel I’ve already missed enough of their activities over the last few years,” said Wood, who was a standout Mustang when he was in high school.

Wood compiled an 86-43 record as the Panther coach. After an 11-16 record his first season, Wood led the Panthers to four consecutive winning seasons including two 20-plus win campaigns.

His Palmyra career was capped with a 14-9 record that included the school’s first district title in seven seasons.

“We’ve had some successful seasons in my tenure, but more than that, the players I’ve coached are all outstanding young men who will be upstanding citizens in their professional careers,” Wood said.

Wood has coached other sports as well, but admits basketball is the game he’s really drawn to.

“Basketball is something I fell in love with as a young person, and the game has been extremely good to me,” Wood said. “It’s provided a career and given me opportunities to build relationships while coaching the greatest game there is.”

And, while loving the game itself, he said its the players themselves who make coaching enjoyable.

“The character and work ethic of the players I’ve coached has been top notch,” he said. “They’ve created a lot of fond memories that I will never forget.”

While family will be the main focus now, Wood said coaching will still be a part of his life as well.

“I would like to continue coaching to some extent, preferably at the MS level where seasons are shorter,” he said.